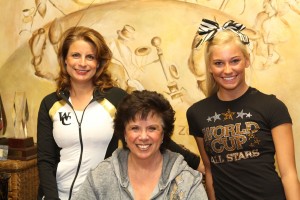 To limit the distraction of having a cheerlebrity teammate, Twist & Shout’s Orson Sykes sets strict rules during competitions for cheerlebrities regarding what’s expected of them, even when it once meant having a sit-down discussion with Whitney Love about strolling around too much at Worlds. (The cheerlebrity quickly isolated herself and went on to give the best performance of her life, Sykes says.)

“You have to make sure that the boundaries are set in place,” Sykes adds. “Whitney and Britni [Love] weren’t allowed to sign autographs or take pictures in the warm-up room. We insulated them to keep people away. At the end of the day, we’re at this competition to perform well. This is not a personal appearance for you.”

Former Cheer Extreme All-Star and current University of North Carolina–Chapel Hill student Maddie Gardner appeared a CNN special about Cheer Extreme that focused largely on her, has her own line of Fancy Face cosmetics and will star in an upcoming Cheer Channel show, Cheer Mashup. Aware of the impact her cheerlebrity might have on her teammates, Gardner recently dedicated an entire post on her blog, “Let’s Hear It for the Bases,” to her team.

“My coach always told us that the flyer is like the quarterback,” she says. “They do receive much of the glory, but also much criticism. I feel as though the bases and backspot play a very influential role in the group; without them there would be no flyer. Again, with a football comparison, where would the QB be without the offensive line?”

Sykes also uses a football analogy to describe his work with Whitney Love. “Cheerleading is like any other sport in the sense that if this were football, we ran a lot of plays for her,” explains Sykes. “On the other side of that, Whitney knew she wanted to win at the end of the day and she got into the team concept. She understood that even if she was tired, coming up to an event, the team had to feed off of her. She couldn’t come in lazy. She set an example by coming in early and working hard.”

As far jealousy among teams, Sykes suggests that such issues are usually a product of the cheerlebrity’s personality. If she’s gracious and a hard worker, she tends to lift the rest of the team up, naturally nipping jealousy in the bud.

“If the cheerlebrity is humble, they would always make it a point in interviews to talk about the team and how supportive the team has been,” he says. “Whitney [Love] never put herself over the team. The team knew that Whitney was extremely talented.”

Sykes admits he’s been lucky to have humble, diligent cheerlebrities on his squads. But what about the other members, who also work hard and conduct themselves in a sportsmanlike manner? Pascale, a founding member of the National All Star Cheerleading Coaches Congress, says she has been lobbying for years to create more scholarships for deserving cheerleaders who aren’t as visible.

“There are so many heroes in this world of cheerleading,” Pascale says. “These young athletes work so hard; they give so much up. We have kids with cancer, kids fighting a disability, kids fighting emotional issues from homes and they come out as heroes. To me, these are the kind of kids I’d like to see applauded and [given] scholarships. I just don’t think there’s enough given to these kids that are so deserving. Justin Bieber, Miley Cyrus—this is what they see, and this cheerlebrity is just hooking on to that model. With all the heroes in our industry, why can’t we gift them in an opposite way of what these kids are programmed to see on TV?”