Power tumbling and trampoline have long been part of the gymnastics world, and in recent years, gained major traction in the all-star cheerleading world as well. Many cheer gym owners are now incorporating trampoline and tumbling into their programs with amazing results. Like any new endeavor, it takes patience, time and discipline to get the program up and running, but the results are often well worth it. 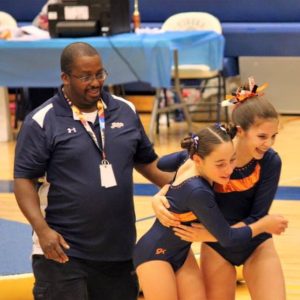 In a nutshell, power tumbling is a specialized discipline that involves trampolines, rod floors and double minis. Like gymnastics and cheer, it’s divided into different skill passes or levels, from beginner to advanced. Kellie Alvarez, Tennessee state chair for USTA (United States Trampoline and Tumbling Association), says that power tumbling and trampoline can build a cheerleader’s existing skillset and give athletes a new sense of aerial awareness. There’s a reason the discipline is becoming a growing trend.

Her advice to other gym owners who want to expand into these areas? Start small. Gyms that want to ease into offering these programs can use their existing floors and start with black bed trampolines to test the waters. “[These disciplines] are very easy programs to add,” says Dean. “The only necessary purchase is a double mini.” She adds that once gym owners know they want to continue, the next investment should be a rod floor and a yellow or white bed trampoline.

As Collinsville, IL-based Pride of Illinois’ tumbling and class director, David Briggs was given carte blanche to develop the gym’s power tumbling and trampoline program a few years ago. The main facility, nicknamed The Lion’s Den, is 14,400 square feet and holds two tumble tracks and two trampolines (in addition to all the other cheer and gymnastics equipment needed for their programs). Briggs says they started small and built from there, working to keep the budget “well within the parents’ comfort zone.”

One way the gym does that is to keep the power tumbling and trampoline program affordable. Currently, they charge $99/month in tuition, which is $30 to 50 less than their all-star prep and competitive cheer programs. Competition fees, coach fees and team T-shirts are added up and divided into block fees for the season.

“Being affordable has been a great asset to our power tumbling program and is definitely one of our number-one selling points,” explains Briggs. “Our power tumbling parents only pay about $800 in block fees for the whole year, and the uniform is significantly less than a fully blinged-out cheer uniform, regardless of company.”

In just one year, Pride of Illinois has doubled the size of their trampoline and power tumbling program. Of the 550 total athletes at Briggs’ gym, 50 compete in power tumbling (five of those are cheer crossovers). The new programs also help with retention of all-star athletes, Briggs says. If they get burned out with cheer or just want a change of pace, it’s something different for them to put their energies into for the long haul or for just a short period of time.

However, transitioning and teaching those athletes who do crossover can sometimes be a challenge. There are major differences in how athletes are judged at competitions, so it’s an adjustment for some at first. “In cheerleading, the judges are far away from where you perform and [there are] often multiple athletes tumbling at the same time,” explains Briggs. “In power tumbling, the judges are right there looking at you. This was a struggle because it unnerved some of our athletes to know they were being looked at that closely.” With solid coaching and a little bit of time, though, those nerves were soothed, and the athletes adjusted.

Both Dean and Briggs say that another common challenge is coordinating practices and managing athletes’ and coaches’ time. “Every team and coach wants the entire gym to themselves,” Briggs says. “Sharing a space with other teams at the same time is always a challenge. But it forces you as coaches to better plan your practices.” As a workaround, they added Saturday practices in addition to their one weekday practice.

As far as hiring new coaches for power tumbling and/or trampoline, Briggs suggests that you can train cheer coaches in those disciplines if they’re interested, but that “the most important investment is to have a coach or director who is passionate about building this type of program. You cannot have a part-time coach who wants to be doing other things within your program in charge of [power tumbling and trampoline]. It will never get off the ground.”

Ideally, hires should have a power tumbling or gymnastic background or at least be highly motivated to learn and embrace the disciplines. “It cannot be someone who is just taking the position for a few extra dollars in their check per month,” Briggs cautions. “The coach must be willing to listen, to learn, to train and to adapt in order to be successful. They also must know how to set reasonable goals.”

And speaking of goal-setting, Briggs says that’s the key to creating success with power tumbling and trampoline. “If you set measurable and attainable goals, it can be one of the best additions to your program that you will ever make,” Briggs says. “Go slow, but go sure.”