As a gym owner, Kim Braasch of Cheer Tyme gets plenty of requests from athletes and parents alike. But when a talented young athlete named Paul asked to wear the girls’ uniform, it was a situation she hadn’t navigated before—yet one that’s becoming increasingly common. 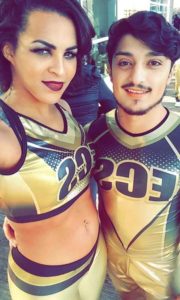 Like many young athletes who identify as transgender, Paul planned to change his gender and his name, becoming “Crystal.” Not only was Braasch supportive, but so was Crystal’s father, who inspired everyone at the Fairfax, VA-based gym with his incredible support.

“You never know how you’re going to feel as a parent, but you hope you would be accepting,” explains Braasch. “I thought it was so brave and honorable and courageous of [Crystal’s] dad to stand up for his child. He inspired us as parents to be able to be that strong and that loving. It just was amazing.”

But what happens when a parent isn’t supportive of an athlete? “In that case, you become the parent role model,” Braasch says.

She also expresses the importance of getting everyone at the gym on board, while still being mindful of the athlete’s privacy. “We sent a letter to our coaches, including the office staff—but not to the entire gym, so we didn’t make it everybody’s business,” Braasch explains. “It was presented in such a positive light, [stating] that we are in support of this athlete, everybody deserves to cheer at Cheer Tyme, and we welcome everybody with open arms. In return, I feel like all the parents and the kids have been extremely supportive.”

It’s all part of Braasch’s philosophy that an inclusive gym environment “starts from the top. If you set the example that this makes this child happy, who are we to judge and try to make them feel inferior? Our attitude trickles down and makes for a more comfortable situation for everybody.”

Jade Faletto, a transgender athlete and coach, had a similar experience when Leeann Teasdale of Elite Cheer Sensation invited Faletto to join her Newport News, VA-based team. “They embraced me with open arms and were very welcoming,” Faletto says. “They knew I was trans, [but] it was never an issue. [Their attitude was], ‘You’re just another athlete, and we’re happy that you’re here. Thank you for bringing what you can bring to our gym.’”

Teasdale sees it the same way, though she believes Jade’s positivity and confidence helped set the tone for helping everyone feel comfortable. “I think you have to take the lead of the person that’s actually going through it,” Teasdale says, adding that “[you] set a precedent by not making something out of nothing. She came to the program, she cheered. That was it. I think that sent a strong enough message where I didn’t really have to say anything else.” 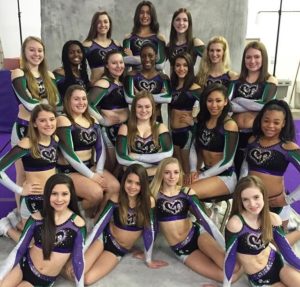 Tannaz Emamjomeh of California All-Stars is also grateful to be able to offer her transgender athlete Sophia a safe space. Though Sophia is now home-schooled, she was bullied during her days of traditional schooling, so the gym has provided a safe haven both then and now. “Cheer is her happy place,” Emamjomeh says. “She’s safe at California All-Stars.”

And how do the teammates respond?

“I’m sure in the beginning there were questions,” Emamjomeh says, “but the kids asked the coaches. The coaches had a couple of private, outside conversations with them, and they understand. There’s really no judgment, at least that I can see. We all care for her deeply, and we know how hard this has been for her, so I think everyone makes a concerted effort to make her feel like she’s just like everybody else.”

Jeanine Russell, floor director at Core Athletix in the Finger Lakes, NY, feels it’s important for the athlete, not the gym, to share what they wish with the gym and its members.

“The goal would be to obviously respect the family’s wishes—the gym has to be concerned regarding how much information it divulges,” says Russell. “If the family doesn’t care who knows, then they need to be the ones sharing the information, so that it doesn’t come back on any privacy breach. Just as we wouldn’t share medical information, it’s the same thing.”

Of course, the more gym staff that are in the know, the more who can ensure that “nobody’s being inappropriate, there’s no bullying, and no discrimination is occurring,” Russell continues.

“Our transgender policy was created out of a need at several events where transgender athletes were competing,” shares USASF’s Senior Regional Director Karen Wilson, who facilitated research and development of the policy. “The policy allows participation by all athletes and follows a self-declaration and prior verification model that the Regional Directors facilitate under the direction of a professional from a third-party advisor.”

The policy has proved timely, as the past year has shone a spotlight on gender identity, thanks in part to high-profile stories like Caitlyn Jenner. Braasch suspects that Jenner’s reveal may have affected new transgender athletes, at least in Crystal’s case: “She’s known for a long time [that she wanted to transition], and when the whole Caitlyn Jenner thing came out, I feel like that helped elevate people’s desire to come forward and do it.”

But as much as Faletto appreciates Jenner’s story, she says it adversely affects people’s understanding of what transgender means.

“She kind of became our leader and our icon, and everybody thought, ‘Oh, this is what a trans person is—trans is surgery and enhancements,’” Faletto says. “People see me and [assume I] had all this stuff done, but no.”

But Faletto knows how important it is to be confident and true to yourself—and how that manifests itself on the mat when you have a supportive community. “If you’re happy with who you are, that will show, and people will respect that,” Faletto says. “Your [own] self-acceptance is the best thing to have; I found that and I’m very happy.”

‹ The 411 on USTA › Candid Coach: Kelly Helton of Cheer Extreme