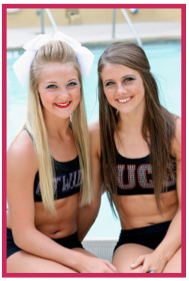 Speaking of Justin Bieber, in many cases, social media tools like Twitter, Facebook, Tumblr, and Instagram have made (or at least aided) the careers of certain cheerlebrities. Gardner has more than 15,000 Twitter followers and Rule more than 16,000, while Nowlin has no less than three fake impersonators. But, Sykes emphasizes, with great social power comes great responsibility. Not only will fans be watching a cheerlebrity’s performance for any hint of a mistake, but the cheer public will be monitoring every tweet and every post for lapses in judgment or perceived flaws in character.

“You have to make sure that they understand that responsibility comes with their platform, meaning if we have a bad practice, they can’t go on Twitter and say, ‘I hate my coach,’ or ‘I hate cheer.’ You are a role model now,” says Sykes. “Even though they’re your feelings and you have a right to your own feelings, you have a responsibility now. The fleas come with the dogs.”

Gardner speaks cautiously yet diplomatically about social media: “Social media has been a huge part of becoming recognized in the cheer world, and I am thankful for its impact; however, I also see social media used as a weapon in our industry to tear down athletes, so to me it is a double-edged sword.”

Just cruising through Twitter reveals a not-so-nice underbelly of cheerleading fandom: One tweet from a user directed at Maddie read, “Maddie Gardner having a tv show…. #overrated #sorrynotsorry”

Add that increased visibility to intense competition, and the mix could be detrimental if coaches don’t get involved, Pascale says.

“Considering how difficult the scoresheet is right now in making these kids do so much within two and a half minutes, I think good coaches try to alleviate that pressure by making these kids have more fun,” Pascale says. “If these cheerlebrities don’t succeed, the next morning, there is no fun for them. It’s agony. And I don’t think it’s fair. Does it make them tougher? I’m sure.”

Gardner herself seems to have lost some love for the “cheerlebrity” concept.

“Recently I have noticed many athletes trying to become ‘cheerlebrities’ and I feel as though it has become negative,” she said. “From my own experience, I discourage anyone from trying to become a cheerlebrity. I do not consider myself to even be one, and I do not think it is important to have a title. I became recognized in the sport because I loved what I did and I put all my heart and effort into it. I was not trying to become famous in the cheer world; I was just doing what I loved to do and was recognized because I expressed my true passion for cheerleading.”

Sykes, however, says he only sees the cheerlebrity phenomenon escalating. “I think it’s going to get bigger, because what I’ve seen in the past two or three years, it’s just like mainstream sports,” he says. “People who sell shoes, even events, they’re promoting these kids now because they know these kids have a following. It’s crazy. I can say something over Twitter, and when Whitney retweets it, I get 15 new followers within five minutes.”

Sarah Gardner, Maddie’s mother, sees both the positives and negatives inherent in cheerlebrity. “I don’t think there are any fantastic benefits to Maddie being in the spotlight, but she has met amazing people—some of whom will be instrumental in her future and some who will be lifelong friends,” Gardner shares. “She has learned to handle public criticism with grace and, as a result, become very ‘thick-skinned,’ and she’s developed a strong work ethic. In retrospect, there are some perks but not what one might imagine them to be.”