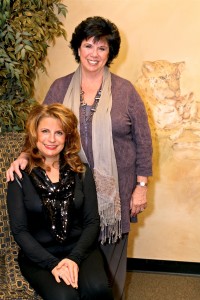 For 20 years, Elaine Pascale and Joelle Antico, the mother-daughter juggernaut behind New Jersey-based World Cup All-Stars, have been churning out a steady stream of athletes—an admirable feat for anyone, let alone a one-time schoolteacher and an accountant.

Arguably one of the most recognized all-star programs in the nation, World Cup has amassed a trove of trophies and awards—including three Worlds championship titles, seven NCA national champion titles, and first place at The Majors 2014. And while Antico credits “karma and good business practices” for their two-decades long successful stretch in business, there’s also a collegial and harmonious relationship between the two women that keep the doors open and athletes clamoring for spots on their coveted teams.

“We joke that we’ve been together since our past lives,” said Antico.

“I start a sentence and she finishes it,” added Pascale.

The team is, of course, the esteemed Shooting Stars, regarded for stunning win after win after win. But developing a high-octane Level 5 team wasn’t always the plan. Antico and Pascale started out coaching Freehold, NJ area girls on the local Pop Warner team simply for enjoyment. A harbinger of future success, the team brought home a National Championship in 1992. After that win, “the kids made it clear that they wanted more,” said Antico, who, along with her mom, agreed to lead a rec team on a volunteer basis. Dubbed World Cup, the team earned another National Championship in 1995. Then Pascale’s husband passed away suddenly in 2001 and coaching for free was no longer sustainable.

“That’s when we turned it into a business,” said Antico, who this year was nominated for Program Owner of the Year by USASF along with Pascale. 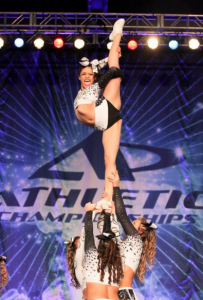 “We focus on the business side of the gym, collect tuition in the beginning of the month and cover the operating expenses,” said Antico. “Numbers don’t lie and that’s why we’ve been around for so long.” [See page TK for more on the franchising trend.]

Smart money management aside, the athletes’ high skill level and deep reservoir of awards have also garnered World Cup media attention. Besides a 2013 Internet documentary that chronicled the Youth Level 5 Twinkles in their quest for first place at the NCA All-Star Championships, World Cup and its athletes have walked in parades and performed alongside Hollywood celebrities. And while the documentary, Twinkles: Chasing Perfection, was raw, real and well received, not all of the press has been welcome.

“The reality shows have been dying to get us on television for years,” said Antico. “But I won’t put the girls through that kind of pressure.”

Antico’s mama bear protective instinct isn’t surprising—her daughter Gianna, 12, is a flyer on the gym’s Junior Level 5 team, the Starlites. Since she’s the daughter and granddaughter of the owners, an admittedly tough spot for the green-eyed dynamo stunter, Antico tries to shield her as much as she can from any notoriety and instead, encourages her to focus on the sports’ benefits; athleticism, camaraderie, teamwork and good sportsmanship.

“They try out as individuals, but we teach them how to be on a team,” said 70-year-old Pascale, known as “The Godmother of Cheerleading,” a moniker she earned after co-founding and chairing the NACCC for a decade. Despite recently stepping down from that role, Pascale isn’t planning on slowing down. This year Pascale, a piano player who nearly attended the prestigious Juilliard School, wants to see World Cup focus on “the musicality.”

“I want to see routines that the kids can enjoy,” said Pascale who, in a twist, eschews the traditional push for athletes to continue cheering in college.

“We don’t care if our girls cheer in college; we just want them to go to school and get a degree,” said Antico.

Besides education, safety is the number one priority. “The sport gets more difficult every year,” said Antico, who co-founded the NACCC with her mother. “The skills are harder and higher, but that’s why the NACCC is so important because they protect the athletes.”

One-on-one attention is also part of keeping athletes safe and striving to be better. On a recent afternoon, Pascale remembers chatting with an athlete struggling to nail a difficult move. “I told her she would get it,” said Pascale. “[I said], ‘We just have to put you back in the pot and add some salt and pepper.’”

‹ Let’s Hear It for The Boys › Know the Score: Unified vs. Universal