Down to Business/ Web Exclusives/ webexclusive1

Let’s Hear It for The Boys 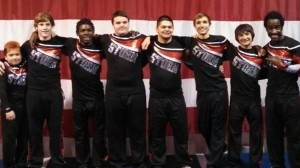 At ACE Cheer Company, the colors of choice are bold reds and blacks, the teams have names like “Comanches” and “Warriors,” and the music is carefully chosen to appeal to both sexes—all part of a finely honed marketing strategy to attract male athletes. “Our marketing and imagery for the coed program is masculine,” says ACE’s J.R. Zeringue. The approach continues on the mat as well: “We always offer high fives and change our verbiage to ‘dog,’ ‘dude,’ or ‘man’” to make male athletes feel more comfortable.”

ACE is solidly on the right track, but not all gyms are as adept at recruiting and retaining male athletes. Though getting female cheerleaders into the gym is rarely a problem, the ratio of male to female athletes can often be highly imbalanced. That doesn’t mean it’s impossible to get boys into the sport—it just means gym owners might need to get creative and put in a little extra effort to pique their interest.

Successful recruitment of male athletes often relies on one surefire marketing tactic: the girls. Some gyms host themed “Bring a Boy” nights or weeks where current cheerleaders bring male friends or boyfriends, or stunt parties where the cost of admission is bringing a male to the event. The goal? That once prospective male athletes see the sport up close, they’ll be hooked.

“A lot of our boys are recruited by girls that they are friends with that currently cheer [with us],” says Melissa Torres of Island Xtreme in Plainview, New York. Gym owner Michael Talbot agrees. “You don’t have many male athletes that just walk into the gym asking to be a cheerleader,” says Talbot, who owns Norwalk, CT-based Xtreme Cheer.

But, especially once athletes are in high school, the girls will get them in. Talbot’s gym runs open tumbling classes that attract boys who want to learn to flip, and they also emphasize the fact that taking tumbling and cheer classes can help male athletes in any other sport as far as body awareness, strength and balance (which can be another selling point for male athletes—and parents—who might be on the fence).

Even though the girls might help get older athletes into the gym, some gym owners believe it’s most effective to get boys interested at a very young age—when they’re relatively fearless and will try anything. One way to do so is to offer creative tumbling classes specifically catered to young boys (such as “American Ninja Warrior” or superhero-themed classes). Case in point: CheerForce Orange County, where owner Jasen Aldridge offers “Superhero” tumbling classes for “little guys who want to fly.” The young athletes wear capes and impersonate their favorite comic book and movie heroes—all while learning how to tumble and slowly entering the sport.

Zeringue of ACE Cheer Company and Torres of Island Xtreme take the opposite viewpoint. Zeringue believes that ages 11 to 14 are when younger males really take to the sport and stay in it for longevity,” and Torres says there’s less stigma to fight once kids are a bit older.

“With older athletes, you tend to be able to appeal to a certain aspect of their ego. I am not saying that they are egotistical at all—rather, they are more aware of what they are going to do, and they want to look strong and do something that takes skill and strength,” says Torres. “I do think that younger is harder, because you are still fighting a social stereotype in the minds of the parents: ‘Boys don’t do cheerleading; that is for girls!  Boys play football, hockey, baseball, basketball, soccer….’”

One Part Inspiration, One Part Perspiration

Mentoring and scholarships are also important means of bringing male energy into a gym. Having male coaches who can guide and inspire male athletes can prove essential; some gyms also bring in nearby high school and university cheerleaders to work with new male athletes.

“Mentoring is a large part of our program,” says Zeringue. “Several young men come to the gym with little to no father figure and we are the only father-like figure they know.” Heart of Cheer co-founder Pam Swope concurs, saying that having male coaches to mentor athletes “shows the males on the team that they can grow and continue to work in cheer doing what they are doing.”

Free tuition or special scholarships are other surefire ways to bring in male athletes, but many see this as an unwise practice that may not be fair to the paying female athletes. “The owner’s perspective on that is: why offend long-time customers to bring in a possible male athlete?” explains Swope.

No matter which methods your gym uses to attract male athletes, doing so can truly help balance the energy and efforts of your program—and grow your client base overall.