Keep Your Eyes on the Prize

At Midwest Cheer Elite’s Lima, Ohio location, a cheer dad approaches a wall covered in Post-Its and takes one that says “Band-Aids.” When he goes to the store later that day, he’s not just buying the gym something they need, he’s earning an entry into Midwest Cheer Elite’s contest for a month of free tuition. Many gyms use contests like this one to engage athletes and their families and generate excitement—and, more often than not, it works.

Here’s how it works: “We have a wall in the gym, and once a month, we put up Post-It notes,” says gym owner Jamie Crippin. “Each Post-It has an item on it—a case of water, pens, paper towels, office supplies, first aid supplies and other items. Everybody comes in and pulls a Post-It note; when they buy that item and bring it in, they get a ticket that’s put into the drawing for a free month’s tuition.”

Crippin runs the contest almost every month, and it’s been very popular: “I will put up a hundred Post-It notes, and within a day, half of them are gone. People take five or six.”

To keep the drawing anonymous, Crippin gives out numbered carnival tickets in exchange for the items. That eliminates any accusations of favoritism and makes it easier on Crippin, who simply picks a number and posts the winning one on Facebook.

Crippin has also learned to be very specific about the quantity of items needed. “Once I put toilet paper on there, and I got [only] two rolls of toilet paper. [So now], even with pens, I’ll specify how many I want in a pack.” She also recommends that gym owners post more notes than they actually need: “A lot of times, you’ll have people take them, and they won’t bring them back. You may put up 100 Post-Its and only get 75 back.”

While the Post-It contest is a practical way to keep the gym stocked with supplies, other contests offer silly family fun—which can also be worth its weight in gym gold. After Burns, TN-based Elite Storm Allstar Cheer & Tumble opened in May 2015, owner Dida Finch thought a contest would get people working together and get the gym some attention. Over the July 4th weekend, the gym held a video contest for the best daddy/daughter dance to the popular Silentó song, “Watch Me (Whip/Nae Nae).” The video that got the most likes on Elite Storm’s Facebook page would win an Nfinity backpack. 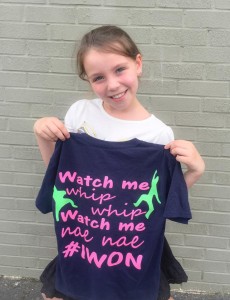 To Finch’s surprise, one of the contest videos went viral. “The last time I looked, it was at 3.4 million views. The newspaper did an article about it, and it was on the radio and on TV—it just kind of skyrocketed,” shares Finch. “It was crazy.” The winning video featured cheerleader Gabi Mann doing the “Whip/Nae Nae” dance with her dad and her two grandfathers. When Gabi won, she gave the Nfinity bag to a friend, and Finch made her a custom T-shirt so that she’d have a prize, too.

Because the contest reached such a wide audience, it grew Elite Storm’s Facebook page from around 230 likes to over 6,000 likes. Finch recommends that when choosing a prize, it’s important to pick something that the children really want: “Our next contest is going to be for one of the gym’s letterman jackets. It’s something that parents don’t necessarily buy, but all the kids want.”

Tiffany Hayes, owner of Chico, CA-based Chico Cheer All Stars, also ran a “Whip/Nae Nae” contest featuring girls and their moms. “I knew our families would dress up and totally go for it. We got a bunch of new followers,” says Hayes. “We had one family that made a full-on music video. They had matching outfits—they spent hours on it.” The prize: free shirts for the family.

Chico Cheer also hosted a bow-and-arrow stunt photo contest for fathers and daughters, and the cheerleader whose photo got the most likes on Facebook won a free summer camp. Hayes says, “We have these dads that are diehard fans of their daughters, so I thought it would go over really well, and our dads went nuts with it. They’re competitive, yet they want to have fun, you know?” 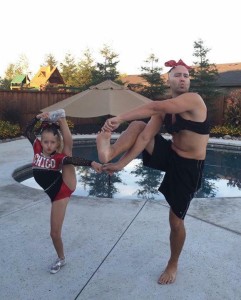 Hayes likes running contests because they help build a feeling of community at the gym. “I feel like we can get caught up in the competitiveness and getting tuition in on time,” she shares. “Contests like these bring positivity into the cheerleading atmosphere and make it more family-like.”

Even if a contest only gets a few entrants, as was the case with Chico Cheer’s bow-and-arrow contest, the results are a lot of fun. A social media contest where people compete for the most “likes” on a silly photo or video helps the gym’s social media accounts grow. To that end, Hayes recommends posting any submissions directly on the gym’s official Facebook page: “You want it to be about your gym, and about your program.”

She also points out that her contests aren’t just for cheerleaders who are on teams—anyone who attends the gym can participate. When a contest gets clients excited, while also promoting the gym, everybody wins.