It’s the health trend du jour—everyone seems to be talking about bone broth. And if it’s not on the radar of your athletes and staff yet, maybe it should be. Advocates rave about the drink’s healing properties, and high-profile athletes like Kobe Bryant swear by it. But does bone broth live up to the hype? 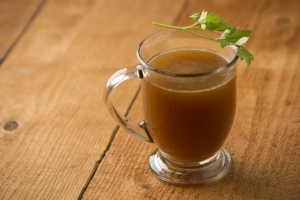 Registered dietician Esther Blum credits bone broth’s current popularity to the rise of the Paleo diet, which is built around foods that ancient hunters and gatherers would have eaten. She believes that bone broth’s biggest benefit is that it supports healthy bones. “It’s rich in trace minerals, which support the bone matrix and the building of bones,” says Blum. “Bone broth also has a lot of glutamine, which combats gut inflammation and supports immune function. Glutamine is also wonderful as a post-workout recovery nutrient.”

The question skeptics ask is whether bone broth is just a souped-up version of stock. Similar to stock, bone broth is the liquid that remains after animal bones are boiled in water, typically along with vegetables. It differs from other types of soup in that it is typically served as a hot beverage for sipping.

Though some question the claims around bone broth, Blum’s a believer. She drinks bone broth regularuly, especially during the cold months of the year when she’s prone to colds. “I’ll drink a mason jar’s worth of broth throughout the day when I’m feeling sick, and the next day, I’m totally fine,” shares Blum. “It could be the hydration, you could argue, but I believe it’s the nutrition in there.”

And bone broth doesn’t just come in handy when the temperature drops—it can also be a way to nourish tired bones after a long practice. Whether you choose to drink bone broth before a workout to build up energy or post-workout to speed recovery is your call: “As long as you’re getting your nutrients in within 12 to 18 hours after you work out, you’re really okay,” says Blum, who is also the author of Eat, Drink and Be Gorgeous.

While a serving of bone broth can cost up to $9 at Brodo (a bone broth take-out restaurant in New York City), it’s simple to make it yourself at home. (See sidebar for an easy recipe.) Here’s how Blum does it in her slow cooker: “I use large bones, like knuckle and neck bones. You can use bone marrow bones, but I recommend getting the marrow out first; otherwise, it’s very oily and fatty,” she advises. “Different cultures use chicken bones and fish bones—the larger the bones, the more collagen you’re going to get.”

No matter what type of bones one chooses to use, Blum emphasizes the importance of cooking the broth over low heat. “There is a real science to it. Most of us, we’re boiling the heck out of the bones, which breaks up the collagen so you don’t get the same nutrients,” says Blum.

Food trends come and go, but bone broth has been around for centuries, and it’ll probably be around for many more. As Blum says, “It’s just soup.” She recommends drinking a mug of bone broth a day to support bone health—which is sure to boil down to better performance overall.

Registered dietician Esther Blum provided us with her tried-and-true, easy recipe for making bone broth in the comforts of home:

Instructions: Place the bones into a 7-quart slow cooker and pour the vinegar over the bones. Let sit for 30-60 minutes. Add the chopped veggies and 16 cups of water. Cook for 16-18 hours on low heat overnight. (Never raise the heat.) Cool, strain and pour into glass mason jars [for daily consumption]. Keeps for five days in the fridge and in the freezer for up to six months.

‹ In Case of Emergency › Keep Your Eyes on the Prize