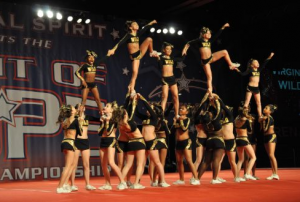 Ever since The Aloha International Spirit Championships in Honolulu began requiring stay-to-play in 2005, event producers have been following suit. As more competition companies start to shift their policies toward stay-to-play, the industry has reached a heated crossroads. Gym owners are fighting for the right to reserve their own hotel rooms, while event producers maintain that it’s necessary that they require programs to book room blocks at designated hotels. As the new season takes shape, the question remains: how exactly will this growing practice affect the world of all-star cheer?

If Tanya Roesel’s Midwest Cheer Elite is any indication, large programs could change course and leave competitions for which they’ve been long-term customers. “We pulled over 1,100 athletes from CheerSport nationals—all four teams,” shares Roesel, whose final straw came when one of her cheer parents sent her an email explaining that she would be forced to retire her child if the schedule continued to include CheerSport.

“What we saw with stay-to-play was that all the costs were $25-$50 higher a night,” adds Roesel. “Not only do my parents have to pay gas money or flights, but now they have no means of negotiating any hotel rates. They can’t use their reward points. They can’t go on Hotwire and get their own hotel rooms because now they are stuck with stay-to-play—where historically the prices have been higher.”

A growing majority of gym owners say they are also riddled with complaints from cheer parents that stay-to-play hotel rooms have become too costly—and that they’re prevented from using rewards points to book them. Some gym owners also suspect that event producers may be receiving kickbacks from the travel agencies, further driving up the cost.

West Virginia Cheer Academy owner Kayla Wygal says she experienced the difference for herself this year when booking travel for Universal Spirit’s Spirit of Hope competition in Charlotte, North Carolina. “Last year, stay-to-play wasn’t required [for that competition]; I think they were transitioning into it,” she recalls. “This year, I contacted the same hotel we stayed at last year and there was a block tentatively waiting for us at $89/night; of course, [the stay-to-play booking] got us rooms at another hotel for $129/night. It was frustrating because I knew there were cheaper rooms available, but we couldn’t get them because that was not what we were assigned through stay-to-play.”

As the tension continues to build, so do the rumblings that some gym owners are planning to pull their athletes from certain competitions. While not everyone has the guts to follow in Roesel’s footsteps, others have certainly thought about it. “I think if enough small gyms like [mine] felt the same way I did, it probably would affect things big time,” says Wygal.

Spirit Celebration’s Billy Smith, however, sees these threats as idle. “I don’t think people are actually going to stop going; they are just going to be frustrated about it,” says Smith. “I haven’t seen any decrease in registration so far this season. People are going to go where there is competition, and they are going to pay to be there. It’s just one of those things.”

On the Flip Side 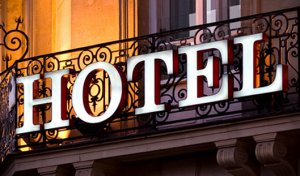 While gym owners are a hard sell, stay-to-play proponents are quick to defend the policy. Liz Rossetti of Americheer maintains that her company’s stay-to-play program provides a benefit to its customers. “We work with a travel company and they are in the cheer industry, so they know how important it is to find a hotel that provides breakfast at a reasonable amount or has the right facilities that fit four or five in a room,” she explains. “The whole idea of stay-to-play is to have the travel company cater to individual needs for teams and their parents as well. It’s really your one-stop shop. It creates an overall experience for each team.”

She adds that in lieu of pinning down just one hotel that coaches have to book from, Americheer’s program provides an array of choices at a variety of price points. For the upcoming Buckeye Open Nationals, for instance, participating programs are able to select from seven different hotels.

Tara Patton Harris, Vice President of Sales with The JAM Brands, says that JAMFest Super Nationals moved to a stay-to-play approach in order to provide hotels that were more closely located near the competition venues. “Prior to moving to stay-to-play, we constantly heard complaints from customers that they couldn’t book rooms in downtown Indianapolis for the weekend,” explains Harris. “There are often many other conventions or sporting events going on and the blocks we were given sold out very quickly, not allowing for many teams to be conveniently located to the venue. The Indianapolis Convention & Visitor’s Bureau agreed to double the number of downtown hotel rooms we were given if we agreed to move to a stay-to-play policy.”

While gym owners campaign for the dismissal of stay-to-play, the format doesn’t seem to be going away anytime soon. Yet some event producers are striking what they consider a happy medium with “inform-to-perform” policies, which provide hotel room options for coaches and teams but do not make it mandatory for them to book them. The only requirement? That they note ahead of time where they’ll be staying.

“Truthfully, in the big cities, you just have to have an avenue to give them the numbers,” says Renee Smith of United Cheer, who has opted for this middle ground and decided to handle things internally rather than use a third-party travel agent. “We’re offering host hotels on our website, but if athletes come from out of town and stay with a relative or book elsewhere with their points, that’s fine. We just ask them to inform us so we can have the numbers to give to the city.”

So what’s the advantage to booking through Smith? “I am finding that by not using a travel agent, I’m able to get hotels cheaper,” she explains. In addition, United Cheer now offers a $5 rebate for each reserved room to a team’s coach. “So if you have a gym with 100 kids and they were to stay two nights, you’d have 200 times $5. The coach would get $1,000 back, which would hopefully help pay for their expenses. [We do] whatever we can do to keep cheerleading costs down.”

As far as this season goes, it appears to be business as usual—stay-to-play or not. Some teams are starting to pull ouof competitions, but event producers aren’t seeing enough of a threat to make changes in their recent policies. And, as Billy Smith notes, the only way that change will come is if enough people put their feet down. “I don’t think it’s going to change anytime soon. There are way too many gyms out there that want to compete,” says Smith. “The coaches have got to know that if you want the power, stop going. If enough people do that, they’ll stop the stay- to-play [policies], but until then, I don’t see it going away.