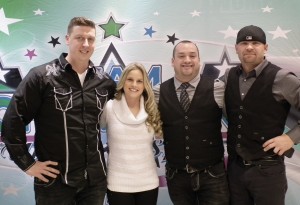 Platinum Athletics doesn’t mess around. The small Midwest gym represents its region with steely resolve—and the industry is taking notice. The 2013-2014 season was the emerging program’s best one yet, thanks to coach Kyle Gadke being nominated for USASF’s “Choreographer of the Year” award, its Level 2 team placing eighth at the Summit, and the gym’s second full paid bid to Worlds in three years. (To date, Platinum Athletics is the only coed team from Missouri to receive a fully paid bid.)

Reaching this point hasn’t been easy, but then, things never have gone that route for Platinum Athletics’ owners, Kendra and Adam Rufkahr.

Growing up in a small town never stopped Kendra, née Huddleston, from going after what she wanted. Unfortunately for her future husband Adam, during college in St. Charles, Missouri, the double threat gymnast/cheerleader knew she didn’t want Adam as her stunt partner. He was not one of Lindenwood University’s burlier male cheerleaders, even though he was as strong as anyone on the school’s squad.

So marrying Kendra, having children together and becoming business partners at Platinum Athletics in Maryland Heights, Missouri, would transpire the hard way. Adam started with proving himself a worthy stunt partner and helping their team go on to win numerous national titles. (He’s not one to shy away from a challenge.) 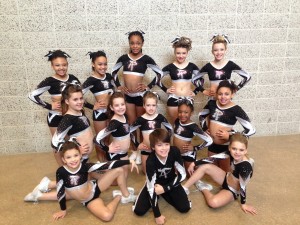 Eventually, Adam won her over. “Things really started clicking,” Adam says, looking back 11 years and one daughter later with Kendra. “And obviously there was a little more interest than stunting.” The two married after graduation, taking their partnership to the next level.

Things didn’t go much smoother when Adam met fellow Lindenwood squad member Kyle Gadke. Though Gadke went on to work with the Rufkahrs nearly his entire coaching career, he and Adam clashed during their early college days. Cheer ultimately provided common ground for the young men who grew to become trusted friends, team members and even better colleagues.

A lot of what would transpire during Kendra and Adam’s post-graduate cheer years would prove just as arduous. When Kendra was offered the cheer director position in 2007 for a tumbling gym’s competitive cheer program after graduation, she brought Adam and Gadke with her as coaches. Adam, who spends his days as a software developer, coached at night. He couldn’t help participating in a sport he’d become so passionate about, and the pretty lady in charge was keen on him by then.

When the Rufkahrs’ vision for the program did not line up with the gym owner’s ideas, they parted ways in 2009. That left at least 100 kids without their trusted coaches. It quickly became clear to the Rufkahrs that the responsibility to their athletes went beyond paychecks. With three competitions left in the cheer season (one of which was a Worlds bid competition), they needed to spring into action to create their own gym, which would become Platinum Athletics. “We basically started from scratch,” Adam says.

While the pair lined up the bricks and mortar, parents offered up their homes and garages, assembling uniforms and bags, printing fliers and more. Adam and Kendra borrowed space at nearby gyms in a pinch. They needed new uniforms, fresh choreography and a catchy program name—stat.

“It definitely taught us how to utilize our time and get stuff done when the pressure is on,” Adam says. “At the end of the day, it’s like ‘How in the world did we do that?’ But at the time we didn’t really have an option. It was either that or fail, and that is not something we like doing.”

The coaches, Adam says, have been most vital to Platinum Athletics’ success. Every member of the coaching staff participates and has a voice in management decisions, particularly Gadke who has worked with the Rufkahrs since after college. With their staff’s support, the Rufkahrs vision helps the young program continually produce winning teams. “Having a staff in place that is passionate about its job, that is motivated to do well, is key,” says Adam.

Platinum Athletics stays about 100-125 competitive members strong between cheer and hip-hop, despite their growing number of teams. They do not focus on putting as many kids on the floor as possible, instead prioritizing the quality of the teams and choreography. It’s quality over quantity for the Rufkahrs, and every level is as important as the next.

There is no go-big-or-go-home thinking at Platinum, opting instead for clean routines. “We try to balance that line between execution and difficulty and consistency,” he says. “We want people to know at competition that we will be tough to beat.”

And they have demanded attention and respect in the cheer world, right from the start. In 2010, during their first season with a gym to call home, they earned their first Worlds bid. They have made it to Worlds four of the last five years, two of which were fully paid.

And while they love experiencing the excitement of Worlds through the eyes of their athletes, national competitions also afford the owners and coaches the opportunity to grow. They use the events to network, adding to their collection of industry contacts whose brains are ripe for the picking.

“It’s like continued education,” Adam says. “We always need to stay on top of what we’re doing and be open to new ideas and new ways to train. As quickly as our gym is evolving, if you aren’t moving forward you’re falling behind.” And that, too, is not an option.