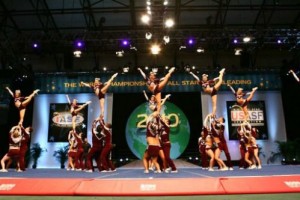 The path to championship glory is paved with good intentions—and smart strategies. To help you discover the right road map for your program, we asked several gym owners for their secrets to success:

Be mindful of the trickle-up effect. Focusing too much on any one team can compromise long-term success, says Orson Sykes of Twist and Shout, which has 20 teams and three Oklahoma-based locations. Several years ago, Sykes performed a thorough assessment of the program and realized that more effort needed to be dedicated to nurturing rising talent. “We realized that we had good upper-level teams, but our younger teams were lacking a lot,” admits Sykes, whose teams have won more than 200 national titles to date. “Our mini and youth programs weren’t excelling as much as they should.”

Sykes reallocated his efforts and resources, and today the gym boasts a successful Youth Level 5 team. “That makes me more proud than anything because I know we’ll be able to compete at a high level for a long time,” he says.

Require a high level of commitment. At Arlington, TX-based Spirit of Texas, cheerleaders are required to attend all practices year-round regardless of illness or outside obligations (the only exception being school functions that result in a letter grade). Mandatory practices are held twice weekly for up to five hours, which co-owner Brett Allen Hansen says helps to elevate the level of excellence. “At Spirit of Texas, everyone is equally committed because everyone is equal—no one is so amazing that they get to miss practice,” shares Hansen, who co-owns the gym with Brad Vaughan. “Not having your entire team at every practice is mind-boggling to me.”

Rock Solid All-Stars in Pinellas Park, FL, takes a similar approach, but only during Nationals season from January until Worlds. Practices are held three times per week, with a “no-miss” policy firmly in place the week before any competition. “’Get better or get beaten’ is our motto,” says owner Carol Bariteau. “We work hard, because we know there is always another gym out there working harder.” 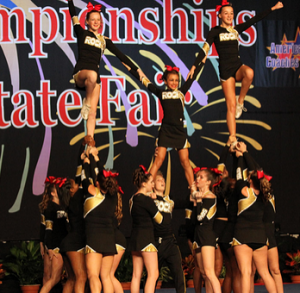 Make sure your staff is in the know. At Rock Solid All-Stars, Bariteau makes a point of requiring her employees to follow industry policies and rule changes closely. To do so, her staff members attend coaches’ meetings as often as possible and stay abreast of updates on the USASF website. “It’s all about the numbers game and knowing how to work the scoresheet,” says Bariteau, whose program has been to Worlds every year since 2007. “Not knowing the scoresheet has hurt our teams in the past, so that’s where your staff really needs to be on top of its game. Since there are so many grey areas, knowing how to get the wow effect while staying within the rules is a big deal.”

Find your “thing” and nurture it. Whether it’s jumps, daring stunts, or stand-out choreography, having a signature strength can be a surefire strategy for standing out from the rest of the competitive pack. To pinpoint your program’s secret weapon, Spirit of Texas’ Hansen recommends honing in on one particular strength during training and playing it up in routines. “Most groups in the top tier have something that they are the best in,” says Hansen. “Really push those areas where you’re great, but don’t forget to also nurture the weak areas so they don’t wash each other out.”

Zero in on stunting potential. In Tampa at Brandon All-Stars, president Peter Lezin places a strong emphasis on finding skilled stunters during the tryout process, saying they “pick [their teams] like a football team, all based on stunting positions.” Hansen does the same at Spirit of Texas, designating a certain amount of slots for bases, spotters, and flyers. He adds that they like to keep the same stunt groups together every year, so it’s important to choose wisely.

“When we’re putting together our team, we look at having 24 people on the team and how they fit into the six stunt groups,” says Hansen. “If you get a whole squad of girls that do double twists but all of them weigh 95 pounds, who will hold each other up? If all of your kids can’t build and do stunts, they won’t be competitive.”

Sykes of Twist & Shout agrees. “We use to take all the kids with fulls and doubles and put them all on one team, despite what they could do stunting-wise,” he shares. “Now, I have kids who can’t do a full to save their lives but they can base any stunt. Stunting has become so important to your overall score that it makes them extremely valuable on our teams.”

Encourage skill mastery. Though many programs have certain minimum requirements in order to make various teams, Bariteau says she’s mindful of assessing true skill level beyond the selection process. “Many athletes are able to hit a skill under pressure during tryouts when the adrenaline is flowing,” she says. “Then, at practice, you end up dealing with kids that don’t have the skill mastered and that poses a problem. We want to be able to effectively run our practices without having to do the skill over and over again when one person doesn’t hit.”

To avoid this issue, Bariteau performs random skill checks throughout the year, and says that she makes athletes aware that “they can be moved at any time to another team if they’re not up to par.”

Learn from the best. Though Twist & Shout is widely regarded as one of the top programs in the industry, Sykes says that he’s constantly seeking ways to become better. “We don’t ever get to a point where we feel like we’ve ‘arrived’ or are too big to learn,” says Sykes, a frequent conference attendee and speaker. “If you want to stay successful, you have to keep pushing yourself to learn more and more.” One way Sykes encourages his teams to learn is by exposing them to other successful squads; at competition, Twist & Shout teams are required to watch the others perform. Says Sykes, “We look at how top teams handle and perform in high-pressure situations—we try to learn from the good and the bad.”

Another effective method is practicing with other teams. Sykes often honors requests from other coaches who want to bring their teams to his gym to observe and train together, and Twist & Shout has its own “buddy team” that they work out and practice with every year at Worlds. “It’s beneficial for both of us,” says Sykes.

Stay united. At Spirit of Texas, Hansen makes a concerted effort to keep teams intact from tryouts through the end of the season. “The team that wins a Worlds bid or goes to Nationals is usually the same time that tried out—once we make selections, rarely do they change,” says Hansen, adding that his motivation is to develop the utmost team camaraderie and dynamics. “When a team has one heartbeat as the walk onto the floor, it’s noticeable and gives you an edge every time.”