Ever seen a team of all-star athletes wholeheartedly cheering for their competitors? It might look strange to an outsider, but anyone with a sister gym relationship understands. After all, when gyms forge close relationships, it creates a unique bond like no other. The owners and coaches lean on each other for support, referrals and resources, and the athletes get to know each other and cheer each other on. Just ask Fury Athletics of Madison, 3-D Elite Allstars and North Florida Christian Cheer—all of whom know firsthand how much having a sister gym can offer. 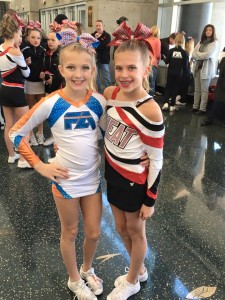 For the past two years, Fury Athletics has participated in Green Bay Elite’s showcase, and this year, Storm Elite joined the fold as well. Owner Julie Petersen says, “These are teams that could be potentially competing against each other several times this year, but everybody was cheering each other on and kids were taking pictures with kids from other gyms. They were getting to know each other, because they’re going to see each other all year.”

The gym owners also support and encourage each other throughout the season. To stay in better touch, they’ve formed a private Facebook group, along with the owner from Heat Athletics. “Sometimes it’s ‘Who do you use for this?’ or ‘What do you do about that?’ and sometimes it’s just venting [about] crazy or funny things that happen in your gym,” explains Petersen. “It’s nice to be able to share some of the things that you’re feeling, and to have someone else who 100 percent understands what you’re going through.”

After competition, the four coaches get together for dinner and to share ideas. “We’re all so far away from each other—the closest two gyms are over an hour apart—that we’re not competing for the same kids in the same markets. It’s a cool group, because not only do we get to chit-chat, but we’re also providing each other with ideas that can help grow each other’s business. I’m really excited about it.”

Here’s the backstory: Maureen Sullivan, program director and gym manager of 3-D Elite Allstars, cheered on an open team in Columbia, South Carolina, with Lanell Timmons and Ty Rogers for years. These days, Timmons is the head coach and Rogers is the dance choreographer at Extreme Cheer and Tumble in Florence, South Carolina. When Sullivan moved to Myrtle Beach and opened her own gym a few years ago, she found Timmons and Rogers very supportive. Sullivan is also friends with Extreme’s owner, Jason Weatherford. “He had two girls last year who moved from Florence to Myrtle Beach, and he told their parents, ‘I’m just going to go ahead and sign them up for what team they’re supposed to be on at 3-D Elite,’” she shares.

The bond may have started between the owners and coaches, but it has grown to include the athletes, too. Sullivan says they follow the same competition schedule, doing at least four competitions together every year. “Our kids are always sitting in front on the floor for each other, and that’s just fantastic,” she says.

Even when the teams compete against each other, the vibe is a positive one. Adds Sullivan, “I don’t know if it’s because we’re such good friends, but there’s never any tension. My kids are always like, ‘We need the competition schedule. We need to know if we can watch them and get back in time for warm-ups.’”

Sullivan remembers one particularly poignant moment from U.S. Finals: “Our Senior Level 1 teams had been competing against each other all year, because most of the smaller competitions didn’t split the large and the small gyms. Both teams made it to U.S. Finals and were actually in different divisions. [Extreme] won the large division and we won the small division, and they were in there trying on their jackets together. You would’ve thought they were all on the same team.”

Although the two gyms don’t always communicate regularly, they remain close. Sullivan says, “We don’t talk as much as we should, but it doesn’t matter if it’s been five days or five months—it feels like five minutes. We work together so well, and it’s hard to find that in this industry.”

North Florida Christian Cheer owner Julie Barry comes from what she calls the “old school” mentality: “You compete on the floor, but leave it there and keep your friendship. We were always supportive of other teams. I was raised that way, and it’s always carried on with me.”

Her gym is especially close with Myrtle Beach All Stars, Dynasty All Stars (in West Virginia) and Power Cheer & Tumble (in North Carolina). Barry says, “We stay in touch as coaches, and the kids have connected on social media.” At competitions, North Florida Christian Cheer’s athletes, parents and coaches often sit with parents of the teams that they’re competing against to cheer them on.

They’ll even plan their competition schedules around opportunities to connect. Says Barry, “We’re having our regionals down here in Florida, and Power Cheer and Tumble is coming down here instead of going to their local regionals so we can hang out for the weekend. We’re doing a thing on Friday night to welcome them. We’re all competing against each other on Saturday, and then we’ll probably all go out to dinner afterwards.”

One reason Barry likes being friendly with other gyms is because she wants her athletes to realize that winning isn’t everything—and that they’re essentially competing only with themselves. “This is what I teach kids: We want every team to hit a clean routine. I don’t want to win because somebody fell out of their stunt. I want to win because every routine hit, but ours was best.”

For Barry, it’s not just about the cheer world; it’s a lesson her athletes will have with them their whole lives. “They’re going to go out into a field—no matter what profession they pick—and they’re going to have to work as a team. If I don’t teach these young people how to be good sports in losing, then my job’s not done.”