Sometimes a merger can be the kiss of death for a business. That, however, was far from the case with East Celebrity Elite, which formed after East Elite and Celebrity decided to join forces in 2009. Since the union, the program has become stronger than ever. 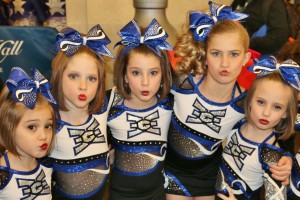 “I think the thing that really helped us get to the next level is that we had different ways of performing,” says Cassie Bienvenue, one of ECE’s four female owners. “East Elite at the time was very technical; Celebrity was more focused on choreography and entertaining the audience,” she explains. So when the two forces came together, it combined the best of both worlds.

East Celebrity Elite’s Tewksbury, MA location is now considered to be the program’s home base. Following the merger, they expanded to two additional gyms in Central, MA and East Windsor, CT. In addition, the gym’s Londonderry, NH location stayed on to continue to service the local school teams that trained there, as did the Oakdale, CT facility. From there, the staff merged and the program really began to shine.

One such success was their Medium Coed Level 5 team winning 2015 Worlds and also being invited to compete at the Majors. Their Medium All-Girl and International All-Girl teams had strong Top 10 showings at Worlds as well. In addition, ECE’s Junior 5 team won the 2015 Summit and their senior dance team had back-to-back Dance Worlds victories. 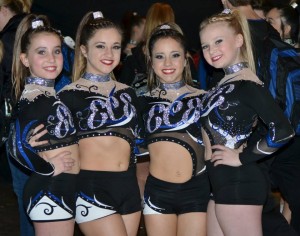 “I think people were interested to see what would happen after we merged,” says Bienvenue. “There are plenty of teams that we’re competing against at Worlds with twice the athletes that we have. I think anytime you become successful and you’re a little bit smaller, it does generate some excitement about your program because everybody roots for the underdog.”

ECE’s Cheryl Pasinato says the program’s growth spurs from the gym’s determination to move their athletes forward. “We’re always trying to get our kids to reach their highest potential, in a positive way,” she explains. “Sometimes you go to competitions and you see these teams that don’t always do well and the coaches are punishing them, making them run laps… Our feeling is no kid goes on the mat and says, ‘Hey. Let’s have a really bad performance today. Let’s not even try.’ That’s not what happens. They are human. So we try to prepare our kids to do their personal best.”

The program’s owners work to foster a family atmosphere and positive attitude in their gyms, regardless of what level of athletes they are dealing with. “We don’t put more emphasis on Level 5 than we do on other levels. Whatever we do for one team, we do for the other team,” adds Pasinato.

Looking toward the future, ECE is currently focused on two areas, one being recruiting new athletes to the sport and developing their skills at a young age. But these kids don’t always have to be all-stars. “Obviously we’re most known for the competitive cheerleading program, but we also try to offer a lot of classes and train high school teams,” explains Bienvenue. “Not every parent can have their kid in all-star cheerleading and we’re very aware of that, but every kid can take a class or come to a clinic now and then. So we’ve done a lot of marketing to attract kids from the surrounding community,” Pasinato adds.

In addition to the gym’s thriving pro shop, the program has also experienced success building up their prep teams. “We’ve been pretty fortunate that we’ve had a lot of interest in them over the past few years,” she adds. Between the gym’s five locations, they’ve averaged 8-10 prep squads per year.

ECE also credit a lot of their achievements to their staff—particularly their tumbling instructors, who have received a lot of kudos on the competitive front. They also laud their coaching staff, including Amy Jones (who passed away in 2012 and is remembered through the Love You Mean It charitable fund) as being part of their success story. “She really brought our dance program off the ground from, like, nothing to winning Worlds,” explains Pasinato. “I think she made a huge impact on the industry as a whole.”

Winning Worlds this year has really energized the ECE owners and has inspired them to continue to build up their already successful brand. “We feel confident that we don’t have a great single team, we have a great program,” says Bienvenue. “And the teams that feed into our Worlds teams are super strong. So we feel like the future is bright.”