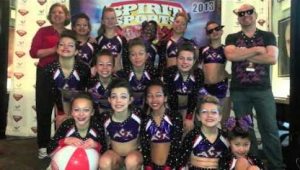 Randy Dickey of Columbia, SC-based ACX Cheer thought so highly of Kyle Wright that after his stint cheering for ACX, Dickey asked Wright to run his gym in Charleston. “Athlete, coach, gym manager, Kyle does it all,” says Dickey of Wright’s work today.

Like many other cheer professionals, Wright was initially a gymnast. When asked to cheer in high school, he was hesitant at first but finally gave in because, “I figured there would be girls there.” Once Wright began training at ACX, he got hooked. He had always been interested in coaching even while competing and started bugging Dickey to let him give it a try. To gain experience, Wright started teaching tumbling classes at summer camps and eventually landed a coaching position at the gym, going full-time after graduating from college.

Wright says he learned much of his coaching techniques from watching his own teachers—having insight into team dynamics is what he sees as one of his greatest strengths. Having been in his athletes’ shoes, Wright knows that resolving team issues is a large part of a coach’s job description. As such, he relies heavily on team-building exercises and uses them to help make the program more successful. ACX Charleston is a relatively new gym, and Wright’s goal is to have their first team ready for Worlds in 2015. However, day-to-day goals are just as important: “At the end of the day, I want my customers to feel good about themselves. And sometimes that may mean that even though they couldn’t get a certain skill that day that they go home with a goal for tomorrow and feel positive.”