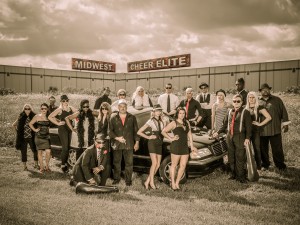 You may know Tanya Roesel as the determined entrepreneur behind the Midwest Cheer Elite empire, but long before her all-star cheer days, she first made a name for herself as a deejay—spinning at Cincinnati nightclubs and eventually opening for major acts like Prince back in the 80s. The road to notability, however, wasn’t exactly smooth: as the only female DJ in town, she was often told she couldn’t succeed because she was a woman. “I love when people tell me I can’t do something because it just makes me want to do it more,” she says.

Roesel took the adversity and spun it into a specialized personal business, finding out what her clients were trying to sell and nailing the kind of demographic they wanted to bring in at large parties. “I loved the challenge of ‘How big can we make this event?’” she says.

Roesel came away from those early gigs with a finely tuned business sense and insider knowledge of the effect music has on human psychology. After spending three years commanding the turntables, she went on to coach high school color guard and rifle teams; in 2000, she was coaxed into coaching her first competitive cheerleading squad—despite never having cheered a day in her life.

Flash forward 14 years, and her gym Midwest Cheer Elite has nearly 500 all-stars, three gyms in Ohio and a brand-new location in Fort Myers, Florida, which went from zero to 300 athletes in four months. Back in Ohio, she is planning to build a bigger gym in Westchester (which has outgrown its original facility) and open three more gyms: a fourth in Ohio, and two more outside the state.

Roesel attributes the rapid growth of Midwest Cheer Elite to an empowered staff that helps each other, attends weekly meetings and is required to know the name of every single child in the gym within 30 days. She strongly believes that personal touch translates to repeat business. “I know my customers, treat them right and, because of that, all I hear is, ‘It’s different, it’s like a family,’” she says.

That said, marketing is also a key part of Roesel’s success strategy. To make Midwest Cheer Elite a household name, she blankets her towns with fliers, posting them everywhere from Kroger’s supermarkets to malls or handing them out the old-fashioned way. One of her tongue-in-cheek mottos: “If it breathes and walks, it gets a flier.”

At the new Florida location, the marketing strategy went beyond paper. The staff built a “haunted” maze out of hay in the gym as part of a fall festival, which created excitement among both the parents and the kids. “When people take a Friday night off and they want to be at the gym, then you know it’s a good thing,” Roesel says.

Roesel’s expertise has become so coveted that she has forged a new career as a consultant, traveling to gyms across the continent to help them course-correct if they’re having difficulty staying in the black. Recently, she met with Panther Cheer Athletics in Canada, where she troubleshot their problems with both their facility and their niche—encouraging them to move into a smaller space that felt more intimate compared to their current tiny slice of a giant stadium and to adopt hip-hop, which no other gym in the area was offering.

Though the advice Roesel doles out to her clients is highly tailored, she has encountered a few common mistakes that many gym owners make. Her top tips on how to avoid them:

Offer plenty of options for parents. Midwest Cheer Elite offers everything from $1 tumbling for an hour on Thursday nights to $175 summer season passes to pricy full-travel packages. If a parent questions how expensive a product is, Roesel offers them a half-season or a single class to bring in customers on all ends of the spectrum. According to Roesel, this approach mitigates unpaid bills and brings in referrals.

Think with your head, not your heart. Don’t let parents avoid paying their bills, Roesel advises. One ways she keeps payments coming in is averaging the services for the entire year and sending monthly bills for the same amount. “You’ve got to keep it simple for the parents, and [your services] have to be budget-able,” she says.

Empower your employees to speak up. Make your office a safe space for staff to feel comfortable talking to you about what’s working and what’s not working in your area. Bottom line: hearing their candid feedback and ideas will increase business and profits.

Embrace competition. If another gym opens up on your turf, look at it as an opportunity rather than a stressor. “I love competition. I love other gyms opening up, because it makes me stop and reevaluate my product,” Roesel says. “What are they doing that we’re not doing?”

Choose music the judges will love. Millennials may dig Miley Cyrus, but nostalgia could work in your favor with 30-something judges, Roesel says. One of her senior co-ed squads recently used “Take Your Time (Do It Right)” by the S.O.S. Band, a tune that topped the charts in 1980. “I always tell my coaches, ‘Get in the heads of your judges,’” she says.

For cheer professionals looking to carve their own niche in the industry, Roesel’s advice is straightforward: “Find out the need and how you can sell that need.” That’s exactly what Roesel herself did, first in her DJ days and now as an all-star cheer expert. “Before I was doing the consulting, I saw that people didn’t know how to run their business,” she shares. “They got into it for the right reasons, but at the end of the day, gyms were shutting down because no one knew how to be a business person.”

Her other guiding motto? When you’ve come up with that big idea, act on it—fast. Otherwise, it’ll become stale and you’ll be seen as a follower, not a leader. “Sometimes you just have to take the risk and execute it as fast as you can, and then figure out what to fix,” she says. And if Roesel’s success is any indication, being a risk-taker pays off in spades.