Should Your Gym Offer a Parent Viewing Area?

On the surface, it sounds like a great idea: provide a specially designated room where parents can watch cheer practice and see the hard work their kids are putting in. But some gym owners say that introducing a parent viewing area can open doors that remain better closed—and invite unwelcome feedback and drama.

That’s not the case for Karen Brenner, owner of All Star One in Egg Harbor Township, New Jersey. She vowed to always provide a viewing area for parents based on her own experience of not being allowed to observe her daughter at her dance studio. “I couldn’t stand it, I wanted to watch,” Brenner shares. “I like my parents—they’re my clients, and they should be able to watch what I’m doing with their kids. I feel like [having a viewing area] helps our parents be involved.” 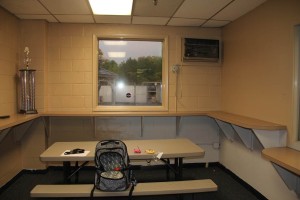 While that’s true, it can also be a liability when parents want to get too involved. “It’s hard to sit and watch someone do something and not think, ‘Oh, I would do that differently,’” explains Casie King, owner of KCK Wildfire in Brookings, South Dakota. “I think if anyone had people constantly watching their job and critiquing what they were doing, they would understand.”

For King, it’s a matter of setting clear boundaries and keeping the roles separate. “When [the coaches] walk in the gym, the athletes need to know to respect them,” says King. “If they’re looking up to see if it’s okay with Mom, that’s not going to work.”

With that in mind, King recently closed her grand viewing area completely after interviewing coaches and weighing the pros and cons. A business consultant told her she was letting her biggest asset go to waste: her gym.

King took the consultant’s advice to heart, and what used to look like a stadium VIP lounge is now two smaller rooms separated by doors. One side hosts a party area with tables and chairs, while the other is a classroom. King offers yoga, flexibility, jumps and conditioning classes, and also rents the space to a taekwondo teacher. She’s now maximizing all of her gym, which has helped her financially, reduced her workload (less cleaning to do), lessened her stress level and virtually eliminated any gossip or negativity.

And what about King’s cheer parents, who can no longer watch their child’s practice? “I was really nervous about it,” she says. “I thought we would have a lot of complaints, and we haven’t.”

At Midland, MI-based Michigan Storm, owner Tara Wieland does offer a viewing area, but has struck what she considers a satisfactory balance by being strict about its use and closing it during choreography, before competitions and “randomly when I feel like it.” Says Wieland, “Parent viewing is a privilege, not a right, and if it’s abused, they can lose that privilege.”

To that end, she has no qualms about dismissing a parent who fosters negativity or oversteps boundaries. When asked whether students or parents are the bigger gossip culprits, Wieland doesn’t hesitate. “If I could coach a team of orphans, I’d do it any day of the week,” she says with a laugh.

Wieland even installed audio and video surveillance in her viewing area to watch over the rumor mill, an investment she feels was well worth it. “Kids will get over it in two seconds,” Wieland says of negativity. “The minute Mom becomes involved, it is a huge to-do.”

If, like Wieland and Brenner, your gym does offer a parent viewing area, there are some ways to make it as hassle-free as possible. Most gym owners suggest an enclosed area, so that there’s no possibility of interaction between parents and kids during practice. Brenner also recommends that the room be on the same floor as the gym: “When you put people up overhead, you can see too much. Then the parents start telling you about lines and formation,” she laments.

At C&C Cheer Factory, owner Angie Crissman added another layer of protection by installing two-way mirrors on what she calls the “Fishbowl,” reducing distraction and serving a dual purpose: “[Students] can use the mirrors when we need them to see what they’re doing, but they can’t see their parents.”

As Crissman sees it, it’s vital to do whatever it takes to send parents the message that coaching is best left to the coaches. “Why are you here if you’re going to teach your kid by yourself?” she says. “[When parents] are yelling or coaching from the side, it’s distracting.”