For Pam Duke, owner of Nor’Eastern Storm, recognition as USASF’s 2015 “Small Program of the Year” means everything. It’s validation of her vision, dedication, perseverance and aspirations. The only problem is that she doesn’t operate like a small gym—which just might be the key to her success.

Going into her 10th year, Duke has learned a thing or two about how to succeed in the all-star cheer industry despite living in an area with limited population. Located on the eastern shore of Maryland, an area that does not realistically have enough potential athletes to support a large gym, Duke makes the most of what she’s got…and that’s a lot.

The small-but-mighty gym’s owner started thinking big from the start. She studied other gyms, particularly the success of another then-small gym she admired, Washington D.C.’s Crimson Heat. Aside from the success of the program and its stellar athletes, the faith-based, non-profit program had another impressive element: Jon Rolle, who coaches Crimson’s Worlds team, 5 Alarm. 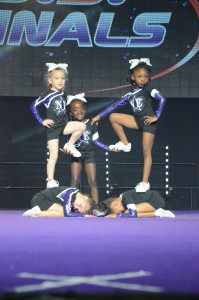 It didn’t take long before Duke recruited Rolle (also Crimson Heat’s cheer program director) as her choreographer. He instantly became an integral part of the Nor’Eastern family, adding friend and mentor to his title. And while camaraderie comes first, technical skills and staying current are a close second. With so much innovation coming out of the larger, more advanced cheer gyms, Duke never underestimates how important it is keep up with the curve.

That’s where Rolle’s expertise comes in handy the most—he’s helped the gym bring home recent titles such as 2014 Level 1 Grand Champions at U.S. Finals and 2015 Level 4.2 Senior Cheer Champions at JAMFest. The program also won IEP’s “I-Award” for 2013-2014, recognizing the qualities of integrity, enthusiasm, and passion. “[Jon] is our catalyst for helping us stay in the forefront of competition,” she says. “He has been amazing for us.”

It is no surprise to Duke that Rolle shares the spotlight with her this year, having received USASF’s “Coach of the Year” award. “He is such a supporter of the industry, period, that I just feel so tremendously blessed to have found him,” Duke says. “I almost feel like it goes hand-in-hand with us getting Small Gym of the Year. We have been together so long that it almost seemed like a natural thing to happen.”

And it’s not just the athletes who notice the difference. “All of our parents who come from other gyms, one of the most important things they notice is that we are willing to go outside the box and not just rely on in-house choreography. We are willing to invest in their children by bringing in the experts to make my gym, their team, their program, the best it can be the next season,” adds Duke. 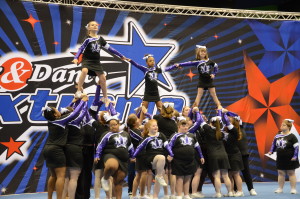 Duke digs in her heels, too. At every competition or event, she can be found tracking down EPs and nurturing relationships, getting her gym name recognition and building its reputation while learning from others’ successes. “I look at these gyms, and I think, ‘Wow, how does somebody become that?’” Duke says. “But I am realistic. That is not going to happen in my area. But I can make my small gym feel as big as them to my kids and my gym family.”

The biggest challenge back home, she says, is educating people about the sport and getting new people through the doors to see the great things happening inside. She does so by passing out flyers at athletic clubs and setting up booths at family-friendly events and fairs. She doesn’t shy away from guerrilla marketing, but her best weapon is word of mouth.

Cheer titan Kevin Brubaker instilled that in Duke from the start. “He told me all the money in the world spent on advertising isn’t going to do as much as word of mouth,” Duke says. “[It’s all about] that parent or that child that raves about your gym and says good things about the coaches and the gym. I took that and ran with it.”

Once athletes join the program, retention takes care of itself because of the program and the family environment Duke creates—complete with movie nights at her house, swim parties, bowling excursions and more. The 12 girls from her first team are all still part of the program, with her first graduate heading to college this fall.

“They all know they are my children,” she says. “It is important to me. We need to be their second family. We need to be the place they can go to escape a bad day at school or to just have their own time to work hard and have fun.” 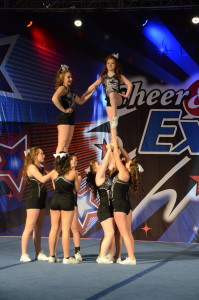 To keep things going, like most gyms, Duke has come up with ways to supplement her competitive teams via other programs that generate revenue. The gym offers prep teams and unique programs like this past summer’s Superhero Camp and a new recreational tumbling program, Galaxy Athletics, which opens the gym up for kids who simply want to learn to do cartwheels and handsprings in a no-pressure setting. Seeing that there was no other program locally offering a recreational gymnastics program, Duke seized the opportunity—and it was an instant hit.

She also accepted a request from the local AAA baseball team, the Orioles-affiliated Shorebirds, to run the team’s dance squad. The program brings more attention to the gym because of the exposure at games and has added some new faces to the roster in-house. It’s a unique dance offering in an area saturated with dance programs, in addition to Nor’Eastern’s own.

The program that is closest to Duke’s heart, though, isn’t about making money or growing the program. It’s the gym’s co-ed special needs squad, made up of athletes ages 8 to 32 with intellectual and physical disabilities. The team, led by coaches with special ed certifications, trains at the gym and faces off against other special needs teams at competitions.

“They want to be like everyone else,” she says. “It has been quite an education. It’s amazing.”