West Coast Rush owner Carlos Onofre started coaching overseas more than 10 years ago. To date, he’s been to countries including Mexico, Canada, Chile, Ecuador, Switzerland and Costa Rica. Says Onofre, “I just put my name out there and, through connections, I started traveling and coaching in other countries.” 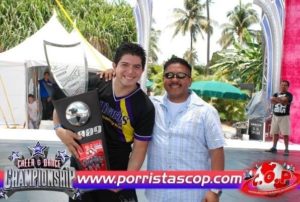 The Dish: “Early on, I started coaching and judging in Mexico—that’s how it all started for me. Now the events have grown so big it’s hard for me to attend all of them, so I have gotten a lot of people to go judge over there. The places making the biggest progress with cheer are Mexico and Canada, and in many cases, they’ll pay what you are worth in the U.S. In some instances, you can actually make a fair amount of money.

Overseas, they’re usually a little bit behind [cheer-wise] because they have gotten a lot of their information from videos or YouTube. They’re getting a lot better, but oddly enough, because they get so much from watching videos, they don’t understand that they’re mirroring. For instance, they’ll stand on their left leg instead of the right or pull their right heel stretch instead of their left, which is the opposite of what we do.

Overall, you’re able to make money on opportunities abroad, but initially, there isn’t much. The exchange rate can definitely hinder that. Besides money, a lot of it is paid off in different ways with flights and hotels. For the most part, they really take care of you and go out of their way to make you feel at home. Because of that, there have been places where I’ve been able to bring my wife and my child to visit and I’ll work for the weekend and then we’ll stay a few extra days. It varies.

Usually, you just need a passport to be able to work outside the U.S. I’ve never been to a country where you need a special visa, as long as you’re not working there long-term. That’s been my experience.

One of the biggest things I would stress is to make sure you go over the details before you agree to anything. Only once did I actually not get what I was owed. There are huge differences in the culture sometimes, so you need to be very upfront about what you need, what you’re going to get and how you’re going to get it. You don’t want to go to a country like Mexico and, all of a sudden, you’re getting paid in pesos. It has happened. I’ve gone somewhere and gotten the money in their currency, so that’s a big one—to make sure it’s all clear before you go.

The language barrier can also be an issue. I’m about to go to Switzerland—initially I was going to work with their Level 6 teams, but now it turns out that I’m also working with their Level 5 athletes. You just have to be clear about what you’re doing and what you’re not doing.

Most of the time, I’ve gotten these opportunities through someone I know directly or someone who knows that person. I’ve also gotten jobs just because I’ve coached so many athletes. They spread their wings and go somewhere and then I might get an opportunity that way.

The experience is very rewarding. I’ve never gone anywhere where they’re not eager and ready to work for you—they’re just so ready to go. I’ve worked with teams in the U.S. where they don’t want to do what you’re asking; overseas, you can say, “We’re going to flip you upside down, and someone is going to catch you by your pinkie toe,” and they’ll go, “Okay!” They trust you, because you’re coming from the States. They make the unfortunate assumption that everybody from the U.S. knows what they’re talking about.

I would do my homework online about the people you’ll be working for, regardless of who it is. You don’t want to go somewhere for the first time without knowing anything at all. If you’ve never been outside the country, it can be overwhelming. Colombia is one of the countries where cheer is growing rapidly, but it can be intimidating to someone who isn’t used to it. Some people can get culture shock. And definitely watch what you eat!

The bottom line: Just be clear about what you’re going over there to do and how many hours you’re working. Be firm, honest and straightforward—they don’t get insulted by that.”