When Midwest Cheer Elite owner Tanya Roesel calls a pizza place near her Ohio gym, chances are, it’s not to order a pizza—it’s to make a deal. She regularly contacts local pizza places, including franchises like Pizza Hut and Domino’s, and asks the general manager to consider doing a cross-promotion. If they’re willing, Roesel drops off a stack of flyers to be distributed on pizza boxes, and picks up a stack of pizza coupons to hand out at her gym.

Roesel and other gym owners are discovering that partnering with local businesses can be a great way to reach new customers. “We try to coordinate it with something going on. Football season is big, so we’ll contact them and say, ‘We have these great flyers. Do you mind putting them on the pizza boxes delivered in the month of September?’ The other one we do is Superbowl Sunday, because it’s the number one pizza delivery day of the entire year. We contact them in September to get permission for [that month], and then we’ll say, ‘Hey, on Superbowl Sunday, is it possible for us to bring up 2000 flyers that you’ll put on the boxes?’” 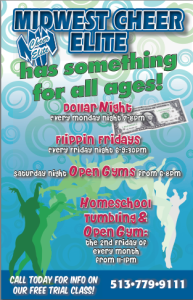 As for the flyer itself, Roesel said pizza places typically want a 5”x 7” size. According to Roesel, the September flyers typically focus on two specific aspects: a special half-season team promotion (since the timing coincides with registration), and a coupon for a free open gym. She tracks the coupons coming in and also puts a message out on social media saying, “If you order a pizza and get a flyer, take a picture and post it!”

So far, Roesel has been impressed by the results. “We give them a year on the coupon. If we give out 1,000 coupons, we’ll probably see 100 of them coming back, but we also get a lot of phone calls.” She recommends that other gyms give this kind of marketing a shot, because “it’s easy and it’s cheap.”

In a similar program at Twisters Sports in Warrensburg, Missouri, Danielle Johnston reaches potential customers by connecting with local charities. She says, “We do a charity of the month, where we offer the opportunity for families to come in and donate things. We did a blanket drive for the United Way, we did a canned food drive, and we did one for Survival House, which is a women’s abuse shelter in our town.” She asks other businesses to help promote the drives, which encourages people to stop by the gym and donate.

Getting new people into the gym—even just to drop off a donation—is a big deal to Johnston. “We’re located in a weird spot, in the back of a strip mall. Our goal is not just to raise the resources for charity, but to get our name out there and make sure people know where we are.”

In addition to building the gym’s brand, Johnston sees tremendous benefits from the charity drives. “We have 550 families coming into the gym every week, and even if they bring one can, that’s 550 cans that go to the local pantry. If even half of the people have a gently used blanket, then we bring in almost 300 blankets. It gives the kids a chance to see that there’s more out there than just what they’re accustomed to.”

Whether you’re handing out flyers or giving kids a fresh perspective, connecting with other local businesses and charities can build your customer base—and give people a great first impression of your gym.