When CheerForce owner, Becky Herrera, logged onto the ASGA Facebook page this fall, she discovered a plethora of posts about a company that was using existing cheer logos to make doll clothes without the gyms’ permissions. This was familiar territory for Herrera, who’d previously discovered the CheerForce logo being used on bows and other apparel—without her consent.

“There was even a gym in Texas that took our logo, changed its color, and was using it as the primary logo on their Facebook page,” recalls Herrera. “It’s frustrating because we work hard to develop our brand and make it recognizable in our industry. It’s our own intellectual property, and other people do not have the right to use it or make money off of it.”

Herrera wasn’t about to let it happen again. “Fortunately, I was given a heads up by my colleagues and was able to reach out to the company [that ASGA members were complaining about] and tell them that they did not have my permission to use our logo before they attempted to do so,” she explains. 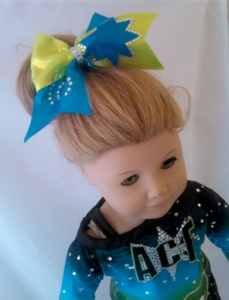 But more gym owners may need to be following in Herrera’s proactive footsteps. As parents and external vendors look to make side income, trademark infringement continues to plague the professional cheer industry—a reality Randy Dickey of ACX Cheer knows all too well.

“I was at a competition, and there was a vendor selling bows with the logos of the gyms that were at the event,” he explains. In order to stop the merchant, Dickey and his colleagues had to approach the competition director. “It got really ugly, but she eventually pulled the product,” he adds.

Many gyms owners have found that it’s often a case of not-so-blissful ignorance on the part of the vendors, shares Tara Wieland of Michigan Storm. While larger corporations outfitted with legal departments may be aware of the concept of trademark infringement, the offenders are often smaller stores or cheer parents looking to accrue additional income by piecing together gym-themed apparel from their homes. In addition, many of these bootleg products are created when cheer moms and athletes contact vendors directly, sending a photo of their gym’s logo and asking for custom clothing.

“What these [people] do not realize is that they do not have permission to use our personal logos without our say,” says Wieland, adding that it is a company’s responsibility to get permission to replicate a logo before proceeding to duplicate it on a T-shirt.

Gym owners who have fallen victim to copyright infringement have not taken the experience lightly. To avoid running into the same issue, incorporate their suggestions on how to ensure that your logo is not replicated without your permission.

Buy your own logo. “If you don’t have it registered, anybody can go and buy your logo and make it their own—and if they purchase it, they can charge you to use it,” warns Wieland. The best way to ensure that you have the rights to your own logo is to have it legally copyrighted. This process is fairly inexpensive (typically around $35 – $55) and gives gym owners the power to stand up for their own branding images. For more information on how to copyright, visit www.copyright.gov.

Be proactive. According to Dickey, the best way to avoid trademark infringement is to keep tabs on the apparel circulating around your gym. “When you go to competitions, that’s often when parents are going to wear the stuff that has the gym logo on it, [and] you’ll know if it’s yours. If it’s not, that’s when you look around and say, ‘Hey, where did you get that?’”

Put it in your contract. “We have a stipulation in our handbook that states that you are not allowed to use our logo to make anything,” says Wieland. “You can’t make sweatshirts for your kids for Christmas using our logo without our permission. If the T-shirt place up the street is going to sell our logo, they need to compensate our brand.”

But, as Dickey points out, there will occasionally be times where one of these vendors will slip through the cracks. So what happens if you find your logo has been replicated without your permission? “The best thing you can do is to reach out to the company directly,” he suggests. “Pick up the phone and say, “You are using this logo without my permission,’ and ask them to remove the products from their inventory.” If that doesn’t work, the next step would be to involve an attorney.

Another resolution is to approach the offenders and offer them a contract to sell their products under consignment. “Would you walk into Chick-Fil-A with your George Foreman grill and start cooking chicken breasts on one of the tables and selling them for 50 cents inside? No, you wouldn’t. They would kick you out in a minute,” says Dickey. “The only transaction for apparel that is going to happen with my logo is inside our facilities and through our pro shop.”