Rallying Your Gym Family After Tragedy

Chesapeake, Ohio is set on the banks of the Ohio River. At last count, less than 1,000 people live in the tiny town, steeped in railway history. Stuck halfway between the two bridges that connect the town to its neighbor Huntington, West Virginia is Jill’s Tumbleworld. Owned by Jill Greenhill, the gym plays home to the Dreams All Stars and more than 350 athletes, some of whom travel two hours to train. When the girls and boys, coaches and trainers head home after a rigorous practice, they can be seen squeezing one another’s hands three times. Later, there will be a flurry of texts and social media posts that read simply, “Sqx3.” 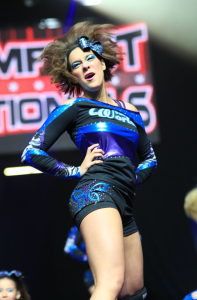 Black was a star athlete at Tumbleworld and an “all-around nice, well-mannered girl,” says Greenhill. “She was soft spoken but somehow managed to make people laugh.” Black was diagnosed with stage 4 brain and lung cancer in March 2011; almost immediately, the aggressive fight against the disease was on. It was during these painful treatments that Sqx3 became much more than just a meaningless series of letters and numbers.

“It was a way to send her our support and love,” says Greenhill. “And it caught on. Girls would send her a text or post on her Facebook page and it just was such a simple way to encourage her.”

While Black battled the cancer with the fierceness of an all-star and the squeezing salvo continued with gusto, Greenhill furthered the momentum both for her gym family and the small town that has rallied around her athletes since the moment she opened her facility in 2001. She started Team Toni Inc., a non-profit organization “designed to strengthen communities and families by offering help where it is needed,” says Greenhill. Through 5K races, motorcycle runs and car washes, funds are raised and donated to Chesapeake locals in need to cover everything from medical expenses to funeral costs and meals. It’s a way, says Greenhill, for the athletes to “reflect on the influence Toni had on us and look at the impact that we can have and the help we can provide to so many others.”

Similarly, Lori Sauers, managing director of the Western New York Outlaw Allstars, is always on the lookout for ways “to pump someone else up.” Her motivation? “The positive vibes you put out always come back.” And with upwards of 220 athletes training at three Outlaw locations, the optimistic energy is abundant. That verve was eventually called to task when, on a four-lane stretch of highway in West Seneca, NY, 14-year old Outlaw cheerleader Alyssa Loschiavo was nearly killed.

“It was such a shock and so abrupt,” says Sauers. As word of the accident spread, athletes, including Alyssa’s sister Gabby, and staff began filtering into the gym. It was there that they comforted one another, cried and talked for long hours about Loschiavo. “The gym was a safe haven where they all felt comfortable sharing their emotions,” says Sauers. “We wanted the girls to know it was okay to feel mad and frustrated.”

Later the gym became ground zero as all-star programs from across the nation flooded the Outlaws with a veritable rainbow of bows that were eventually incorporated into a huge wreath that hung on Loschiavo’s hospital door. The lesson was not lost on Sauers. “That so many gyms participated demonstrated to the athletes how a community comes together,” says Sauers.

Loschiavo eventually recovered enough to leave the hospital but, sadly, her grave injuries left the young lady with severe brain damage. For three years, Loschiavo lived at home with her family; meanwhile, her gym family visited, wore pink and green—Alyssa’s favorite colors—and participated in benefits for the family. After her death in September 2014, the gym hosted a competition and established a scholarship in her name. The recipient, an outstanding all-star, receives tuition and competition fees for an entire year.

Like many gym owners, Sauers and Greenhill bootstrapped their programs from just one or two teams into the strong programs they are today. Despite the growth, both say that knowing each and every athlete on a personal level is paramount—particularly when tragedies hit close to home. That involves checking social media feeds and posts for any sign of stress or sadness. When that happens, both Greenhill and Sauers jump in.

Besides that, the athletes are always encouraged to write personal notes to each other and, in cases like Black and Loschiavo, cards and letters to the families affected. And of course, Sqx3.

The Dreams memorialized Black in other ways too. A giant framed photo of the smiling girl hangs over the front desk of the gym, and this year’s uniforms feature three shoulder straps (a nod to the Sqx3 mantra that buoyed the young patient’s spirits through round after round of agonizing chemotherapy). There’s also a butterfly stitched on the hip. Why a butterfly? When Black passed away on April 9, 2012, at the tender age of 23, the team released 23 butterflies near her graveside. “It was symbolic of life,” says Greenhill.

In October, on the day Black would have turned 26, the team will release 26 butterflies.

“We see things every day that remind us of her,” says Greenhill. “Life is special.”

‹ The Real Deal Behind Divisions I and II › Now Hiring: Finding Reliable Staff