Tate Chalk: To Nfinity and Back 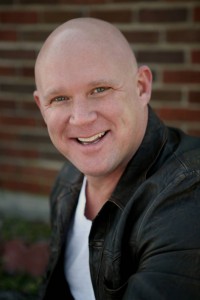 Pacing back and forth on top of purple tumbling mats in front of a rapt audience of All Star Gym Association members, Tate Chalk encourages the coaches and gym owners in attendance to make their voices heard. Wearing a black button-down shirt and stylized jeans, he talks about how to rise above fear of failure and innovate. Suddenly, he goads the crowd to yell, “Money is good!” Understandably, they need a little encouragement. “You all have to find ways to make it work… Learn things, like ‘break-even point,’ and know what they mean,” he says. “Know that this is a business. This is a business!”

Nfinity Athletic Corporation CEO Tate Chalk brings to mind a scrappy Tony Robbins type rather than a stereotypical suit-wearing CEO. After all, this is a man who, when Nfinity was unceremoniously dumped from Cheersport, posted a digital picture of a “breakup tape”—accompanied by a list of songs such as REM’s “Everybody Hurts” written in girlish bubble letters — on Nfinity’s Facebook page and encouraged fans to submit their own favorite sad-sack tunes. Conventional? No. Memorable? Definitely.

He’s also a guy who decided to follow one of his dreams and move out to Los Angeles to try his luck as an actor in Hollywood back in 1999. Among other gigs, he scored a part as a referee in the 2004 Vince Vaughn–Ben Stiller comedy Dodgeball: A True Underdog Story and consulted on cheerleading for the movie. (He says the “brutal” movie industry gave him “a much thicker skin.”)

Speaking up and standing out have become synonymous with 25-year industry veteran Chalk and the Nfinity brand—and that’s the point. The one secret to success, Chalk says, is being original.

“If I had to give three [pieces of advice], I would say be original, be fearless, and be relentless,” he says. “To me, ‘be original’ means know what you are and what you bring, and don’t try to be someone else—and you’ll be successful.”

Chalk has followed his “know what you bring” advice to the letter, taking his stints as a cheerleader at the University of South Carolina and the University of Kentucky and parlaying them into a lucrative career coaching the USC squad, teaching summer camps and owning cheer gyms. Then, in 2003, he developed his own cheerleading shoe just for women: Nfinity, a meticulously designed, spring-floor athletic shoe. The industry hadn’t seen anything like it. And Chalk was in a unique position to sell his vision.

“We’re the only footwear brand whose CEO has actually been on the mat,” he says. “I mean, I was a cheerleader. I coached cheerleading. I have held thousands of stunts and taught thousands of back handsprings and back tucks. And so we hope that the brand comes from a place of authenticity and knowing what it’s like to be there when the lights come on and the music starts.”

Now, almost a decade later, Nfinity Athletic Corporation is not only a consistent leader among the cheerleading shoe market, but has also expanded into basketball and volleyball shoes as well as other sports apparel. In 2009, Nfinity won “Business Innovation of the Year” at the American Business Awards, and the company has regularly ranked in the “Inc. 5000” list.

Though the risks eventually paid off, the early days weren’t without their setbacks. When Chalk was first hawking Nfinity cheerleading shoes, he had only one model pair of shoes and 150 promo T-shirts to try and make his case for the product.

“I was naive, but I think that’s part of being successful—that you’re just naive enough to think you can do it,” he says. “We had lots of defect problems and delivery problems. There was a time there for the first several years that not one shipment had everything go right. You come to accept that it’s never going to be perfect, that something’s going to be off, as far as business goes.”

But Chalk stayed the course, dead-set on making it work. Though his cheer background certainly played a role in his dedication, he attributes his choice of all-star cheerleading as an industry to study and dominate to a deeper reason: the spirit and drive of the people involved.

“I’m really passionate about all-star cheerleading because it gives kids who wouldn’t normally have a chance a [way] to cheer themselves out of whatever situation they’re in,” Chalk says. “Whether they come from the poorest of poor neighborhoods or bad family situations, these kids have had a chance to cheer themselves into a better life. Also, our [industry’s] history is full of small-business owners and entrepreneurs who have taken a chance and taken an idea and created something out of thin air, and that’s noteworthy.”

Putting a megaphone to another marginalized group, Chalk recently founded the Embrace initiative, designed to educate children and parents in the sport about love and acceptance of people of all sexual orientations. The initiative follows a new USASF rule introduced earlier this year decreeing, “Males: minimize exaggerated or theatrical movements,” which has been perceived by some as being anti-gay. (It has since been amended to apply to both genders.)

“The idea being that whether you’re straight or gay or whatever that you can embrace each other in this sport,” Chalk says. “Because of what we do, we’re all sort of outsiders. Cheerleading has a stigma, and we all have to stick together and support each other. And the second part of Embrace is ‘Embrace who you are.’ If you can’t feel safe and secure as a gay or lesbian in cheerleading, then there’s no hope for you in the rest of the world. Our sport should be the one spot that you can go and be yourself and feel at home.”