“Eat, cheer, sleep”—it may sound like a gym wall mantra, but it’s actually one of the taglines for California All-Stars’ online web series “Cheerleaders.” Featuring coach Eddie Rios and cheerlebrities like Gabi Butler, Jenee Cruise and Kiara Nowlin, the AwesomenessTV show has followed the program’s famed “Smoed” Level 5 team and its highs and lows throughout the season. To date, the series has gotten more than one million overall views on YouTube—impressive exposure for what has already become one of the industry’s most recognizable brands.

“Cali Smoed has gained attention since the show—the most sought-after items in our pro shop are currently the Smoed T-shirt and bra,” says co-owner Tannaz Emamjomeh. “However, while our staff and kids appreciate the notoriety, nothing takes precedence over the program as a whole.”

According to Emamjomeh, finding balance in that regard has been one of the primary challenges of shooting the show. Certain athletes are featured more prominently than others—but, off-screen, it’s important that all 885 athletes between the program’s five locations feel just as valued. “We were working through some minor conflicts on our Smoed team because some of the veteran members were questioning if the show was a distraction,” admits Emamjomeh. “Our priority is team success, so we addressed it right away by reminding the staff, kids and parents how much we value team over anything.”

Of course, there have been plenty of upsides as well. The gym receives a stipend that will go toward offsetting Worlds costs, and Emamjomeh says the Smoed athletes have gotten thousands of new Instagram and Twitter followers. For her and co-owner Jeff McQueen, the show has also provided an international means of showcasing the gym. They’d been approached for reality shows in the past, but this was the first time the pitch aligned with their vision. 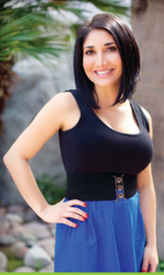 “The producer is a former cheerleader herself, so she understands competitive cheer,” says Emamjomeh. “Her goal was in sync with ours: showing the competitive aspect, athleticism and hardcore training behind the scenes. We felt comfortable that the show wouldn’t impact us negatively, but rather give viewers a glimpse of high-level training.”

Filming started last September and is now concluding after Worlds, where cameras weren’t allowed to capture the competition but caught the action off the mat. There’s talk of making the show into a televised reality show, but Emamjomeh has plenty to focus on until that happens. She and McQueen are currently opening another location in Ontario, CA (joining the five others in California and Nevada), and the program just came off an impressive showing at Worlds with not only Smoed, but also its Sparkle and Black Ops teams taking home gold.

It’s all part of a West Coast cheer empire that only seems to be gaining traction—something Emamjomeh and McQueen never anticipated when they started out in 2001. “We didn’t have any hopes other than winning NCA nationals. We had no inkling that we would ever expand, nor was it a goal of mine,” says Emamjomeh. “Opportunities fell into our laps, and therefore, the business model had to change to maximize success for a multi-location gym.”

She attributes much of the success to the program’s strong sense of identity and level of exposure. “The Cali brand has evolved and grown over the years; I think it’s necessary for any gym to define and shape the culture of the program,” says Emamjomeh. “Our Worlds teams have elevated our exposure and we’re grateful for that. It’s been a fun and exciting ride.”