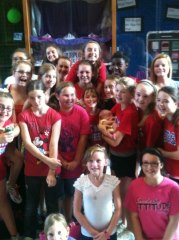 When Jessica Smith first started her Danville, KY-based gym, Southern Cheer Elite, she stacked her shelves with all the business books she could get her hands on. But the primers didn’t prep Smith with the intel necessary for success—either the information wasn’t industry-specific enough or didn’t have practical applications for her own business. One thing was clear: Smith was going to have to find her own way to make it as a small gym owner.

She tossed the books and followed her own instincts to create a thriving business in the world of all-star cheerleading. In two years, Southern Cheer Elite has grown from 12 to more than 130 athletes—a stark contrast to its humble beginnings. “I started my business with $30 worth of borrowed equipment,” she remembers. “We slept on the floor of our apartment and I worked 60 hours a week as a waitress.”

Smith was soon able to say sayonara to her day job, progress that she credits to following her gut. According to Smith, most of the experts in the books she read recommended diversification—advice she chose not to heed and has since seen a growth of 20 percent. Instead, Smith turned her focus to exceeding customer expectations and incorporating personal touches in her dealings with families and athletes. “You have to go out there and hustle and be a part of people’s lives,” says Smith. To do so, Smith and her staff do everything from sending birthday cards to giving out long-stemmed roses at competition. Even the invitation to join their team spreads the proverbial love, as it resembles a wedding invitation.

It’s all part of Smith’s philosophy that cheer parents are actually her employers—one she believes that many gym owners forget or neglect. Smith says many owners believe that everyone is replaceable, but at Southern Cheer Elite, that’s not the case. To minimize commuting and maximize convenience, Smith often goes as far as to change class times or let parents bring kids of different ages at the same time. She also seeks parental input when it comes to scheduling meetings: “We don’t just tell them when it will be,” says Smith. “I’m going to be that person that accommodates them.”

Part of the reason Smith values her cheer parents (whom she calls her “advocates”) so much is her belief that they played a big role in the rapid growth of Southern Cheer Elite. Many parents took it upon themselves to refer new business along with their own, with one mom even bringing in 30 new athletes she’d rounded up. “Our business is forever indebted to those people who took a chance on us,” says Smith.

Smith’s employees are also vital to her success. She’s willing to train the right staff members, even if they have no prior experience in the cheer business—an approach she calls “growing your own staff.” She pays them more than she pays herself, a sacrifice she makes willingly. “They’re worth more than I am. I can’t do it without them,” says Smith, who didn’t take a salary the first year, and even now—like many business owners—is the last to get paid. “You have to be willing to be poor for a while,” she concedes.

For Smith, however, it’s a conduit to following her passion—and the eventual success of her business has allowed her to do just that. “If I won the MegaMillions on Friday, the only change you’d see is that I’d probably have a bigger facility. There can’t be a Plan B in starting a program,” says Smith. “You have to be all in.”