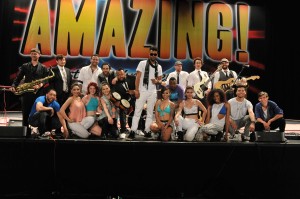 “If you haven’t got any charity in your heart, you have the worst kind of heart trouble,” funnyman Bob Hope once quipped. It feels good to give back, but that might seem like a tall order if your weeks are filled with classes, meetings and competitions. Still, finding time to do philanthropic work can benefit your gym and, most importantly, your athletes.

Many gyms realize this and manage to make giving back a priority. In fact, according to Cheerleading.org, more than half of all cheer teams currently participate in community charity events. A select few have won USASF Chairman’s Cup awards, which honor programs that display powerful philanthropic or community service work each season. Others have been supporting the same charity for years, getting the kids involved in the community—and, in turn, getting the community to pay attention to their business.

Julie Van Os, owner of Tracy, CA-based Athletic Perfection, is a former high school leadership teacher, so being involved in the community has always been a core value for her. Every Christmas since she started her gym, her athletes have gone “ringing the bells” for the Salvation Army in front of local businesses. Last year, they wanted to do more so they “adopted a family” in Tracy for the holidays, donating toys, clothes and gifts. They also help with Case for Kids, a program that provides a “custom case” to foster children—filled with clothes, blankets, stuffed animals and things to make their new place feel like home.

Van Os says philanthropy is a “win-win” as far as business goes, since it helps get the word out about your program and increases exposure in the community. Doing charitable work can also make your kids better athletes, which is a sentiment that many gym owners share. “[Athletes] learn about teamwork, perseverance, commitment and hard work,” says Van Os. “They’re learning about giving back and being thankful for what they have.” 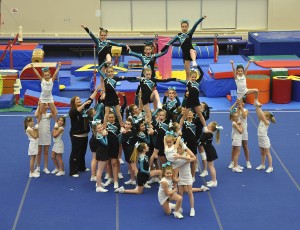 To find balance, Van Os and her team try to do their charity work during the less busy times of the year, when schedules are less intense. She says it’s important to focus on causes you care about, rather than spreading yourself thin.

“Choose something you’re passionate about—that’s the key,” she says. “If you jump around, you lose your drive.” And don’t do it for the business, she advises. Instead, do it because it feels right and you truly want to give back.

Tara Wieland, program director/coach of Midland, MI-based Michigan Storm Cheer & Dance, initially started her charity program to help teach her own daughters the value of appreciating what you have. One of their biggest charities is Toys For Tots, an organization they’ve been supporting for over a decade. They’ve also had the athletes write letters to soldiers in Afghanistan. “It was hilarious,” Wieland says. “One little girl wrote: ‘Thank you for saving our country and I really like camouflage shirts.’ The feedback we got from the soldiers was amazing.” The gym has also done things like hold a flash mob for the American Cancer Society.

She says some kids initially resisted the charity work, but quickly grew to love it. “Watching them give back is better than watching them do something on the floor. It has become the backbone of what our program is about,” shares Wieland.

The best advice Wieland has is that if charity work is going to be a part of the program, explain that to parents ahead of time in an open, honest way. “You have to be upfront about it,” Wieland says. “I haven’t had any problems, and now we have way more parental support than we used to.”

This charity-focused trend also seems to be ramping up with a new slew of competitions in the last few years that devote winnings to charity, such as Amazing! Champions and Cheer for Charity. At Amazing!, participants complete a charity service project, which is announced as each gym enters the performance mat. $10,000 is awarded to the chosen philanthropies of the winners; beneficiaries have included the Texas Autism Foundation, Scottish Rite Hospital, The Dallas Association of the Deaf, Foster Families of Texas and the Carter Blood Care Center, to name a few.

Even if your gym isn’t participating in a competition like Amazing!, it can still be impactful to target a central cause. “Each year, pick a different charity to support,” suggests Smith. “Even better is to have your athletes involved.” And don’t forget to let Smith know about it—on the website for his other company, Spirit Celebration, Smith has created a “Community Service” page to spotlight the good deeds of various gyms.

At Gymniks All Stars in Grand Prairie, Alberta, program director Jennifer Lekisch implemented charitable work as soon as she signed on in 2010. Each year, they focus on different ideas, but always with the goal of bettering the community, which helps keep them focused. They’ve helped victims of a DUI accident and have done advocacy work for Toys for Tots, Breast Cancer Awareness, the “Butt Out” National Non-Smoking Campaign and Heart Month, to name a few.

The gym is a non-profit, so their charitable work is not a tax write-off. “It is just something we do to give back to our community and help build that foundation of excellence in our community,” Lekisch says. She also says that it does attract attention to the gym, which can be a reward in itself. They fit the charitable work into their schedule by doing it during slower points in the season, and they use social media to promote and spread the word about the work they’re doing.

As far as advice for gym owners who are thinking about getting into charitable work, Lekisch says, “Ask yourself three questions: What’s important to you? What image do you want to put out there about your athletes and your gym? What do you want to be remembered by?”

In short, it’s about staying organized, getting the kids (and parents) on board, finding charities that you’re passionate about and integrating the philanthropic work into your gym’s ethos—rather than tacking it on as an afterthought.