When Shiela Hajjar Perry, owner of Saucier, MS-based Cheer Zone Athletics, saw an opportunity to bring cheerlebrities Gabi Butler (California All Stars) and Kiara Nowlin (Baylor University) into her gym, she jumped at it. “Gabi posted on social media that they were going through Interstate 10 and hosting some clinics,” she says. “One of our kids tagged me in the post and said we should get them to come. I thought it sounded like a great idea.

Her instincts were right—the clinic ended up being a fantastic revenue booster for the gym, and a great PR tactic. “We had people travel from as far as Alabama and Louisiana to attend the camp, and lots of kids interested in coming to our gym [as a result],” says Hajjar Perry.

Stephanie Davis at Davis Allstar Gym also brought in Butler and Nowlin and says that the experience provided an awesome learning tool for both the coaches and the athletes. “Being able to reach out to their role models was so exciting,” she says. “The kids would have been happy just to talk to them for three hours, but seeing how they trained inspired the kids to do better.”

Davis’ and Perry’s experiences speak to a growing trend in the all-star industry: the practice of bringing in well-known “cheerlebrities” to host on-site clinics, meet-and-greets, and other special events (not unlike a dance studio bringing in a choreographer to do a master class). For many gym owners, it’s a no-brainer: it’s a chance for athletes to meet and learn from their role models and a way for the gym to gain community exposure.

Yet not everyone is a fan of the idea. Georgia Tech cheer coach King Harrison says, “Cheerlebrities are kids with amazing physical abilities, but they’re just kids—we can’t expect them to teach other kids. I’d look at bringing in the coaches that train these kids instead.” His concern is that cheerlebrities aren’t necessarily trained to teach, so they won’t to be able to properly troubleshoot and train other athletes (save for the few exceptions that are USASF-certified).

Is it the right move for your gym? Read on to see what it takes to host a successful cheerlebrity event. 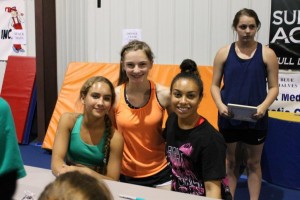 When booking cheerlebrities, it’s vital to know what type of experience they are offering and communicate that to athletes and parents. For instance, Hajjar Perry says that she realized right away that it wasn’t going to be an in-depth learning opportunity, but rather a “meet-and-greet with some tips and drills.”

“Thinking that two people can teach 100 is ridiculous,” she says. “I gave my parents a heads-up that this was going to be a fun clinic where their kids would maybe pick up a couple of tips.”

However, different cheerlebrities offer different experiences. Pittsburgh Xtreme owner Kira Lyndon wasn’t expecting much of an educational experience when she booked Robert Scianna (California All-Stars), but was blown away with how much hands-on training he did. “He gave us a full-on boot camp, and our girls were exhausted at the end of it. This definitely wasn’t just a meet-and-greet,” she says.

Hajjar Perry was very pleased with how the clinic went not only because of the income and positive PR it brought her gym, but also because of the impact on her athletes. “There aren’t a lot of huge gyms here in South Mississippi, so our kids aren’t exposed to a lot of level 5 athletes. Just to have different types of athletes coming through here and exposing them to different styles, techniques and people is good,” she says, “These are the cheerleaders that our kids see in magazines. For a lot of my kids that are Level 1, 2, and 3, it’s an opportunity to see different levels of training and ability.”

When Hajjar Perry first reached out to Gabi Butler, her management provided a contract to sign and all conditions related to the visit were spelled out. “It was very professional,” she says. For Lyndon’s part, she says that though there was no formal contract with Scianna, the whole experience was very businesslike regardless. However, that’s not always the case—some gym owners have had issues with spotty communication after the initial signing process with various cheerlebrities, so be sure to stay in close contact up until the event date and keep an eye out for any red flags.

It’s also important to be clear about what’s included in the cheerlebrity’s fee. Make sure to ask whether accommodations and travel are folded into the overall fee, and whether your gym will be responsible for the arrangements. For instance, Lyndon was asked to pick up Scianna from another clinic an hour away, and after the clinic at her gym, the gym he was visiting next picked him up. Some cheerlebrities also require extra manpower—Hajjar Perry says she was asked to provide a coach (for spotting purposes) on her own dime.

And, as with running any clinic, gym owners should make sure they are covered should any problems arise—by having all agreements well-documented, covering any additional insurance needs, and making sure necessary waivers are signed for anyone attending the clinic.

The cache that cheerlebrities bring into your gym doesn’t come cheap, so it’s important to ensure a return on your investment. The cost for bringing Butler and Nowlin to Cheer Zone for one day was $2,500, so Hajjar Perry divided that figure by the number of tickets projected to sell, then figured any ticket sales above that number were pure profit (and she did make a profit).

At Pittsburgh Xtreme, Robert Scianna charged $55 per clinic attendee (and extra for autographs and merchandise sales). Lyndon added an extra $10 onto each ticket price, but admits she probably could have added more. “Do your research,” advises Lyndon. “We were going to book someone much more expensive, but couldn’t have been happier than we were with Robert. We weren’t worried about having a huge outlay then not making it back.”

Opening the events to a wider audience can also increase profit margins. When Butler and Nowlin visited Davis Allstar Gym, Davis reached out to nearby gyms to see if their athletes would be interested in attending the clinics, and ultimately had kids from four other local gyms buy tickets.

Whatever your opinion on cheerlebrities, there is no doubt that hosting a cheerlebrity-centric event can bring extra revenue and boost morale—along with possibly grooming future cheerlebrities to take center stage.

‹ Starting a Big Sibling Program › Incentive Programs: Do They Work?