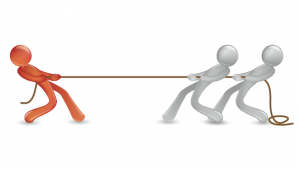 A new gym’s tryouts listed in the local newspaper calendar. Facebook ads promoting a new team. A Twitter campaign that targets most of the local cheer community. Coaches wearing shirts emblazoned with gym info at competitions, making sure to be seen by the Level Five athletes. Signs in the median of the road, attracting the attention of athletes on their way to their current gyms. There are also promises: free tuition if you’re good enough—not to mention free uniform, free travel and the assurance you’re going to Worlds. Cash bounties for getting your (talented) friend to sign up from your competitor. Cheerlebrity-style opportunities for sponsorship, exposure or branding.

Somewhere in there, there’s a line between “good” recruiting and the kind of tactics that cheapen the sport. But where is that line? And as increasing numbers of current all-star athletes move on to be cheer professionals, where will the standard be set in the future?

It’s a conundrum highly unique to all-star cheer gyms. “For most businesses, recruiting means merely gathering more customers. However, in the cheer gym business, it typically means trying to get kids from a different gym to quit there and join your own gym,” explains Cheer Athletics co-founder Jody Melton. With so many gyms vying for business, prestige and trophies, many cheer professionals view recruiting as a means of building the perfect team or shoring up weak areas in an existing squad.

On the surface, most coaches and gym owners can agree on the broad strokes of what’s acceptable and what’s not. Currently competing cheerleaders are out of bounds, but during the off-season or if the cheerleader actively seeks out information, athletes are fair game. “Our overall policy is that no staff should approach an athlete that they know to be a part of another gym,” says Melton. “If that athlete approaches us, then we will talk about our program, staff and facility, but will not trash talk any other gym.”

To some degree, many gyms rely on athletes and families to do their recruiting for them. In the Yelp age, good word-of-mouth is certainly vital for the success of all of a gym’s programs, not just its highly competitive squads. Understandably, gym owners hope that their happy team members will tell their friends about their cheer experience.

“I think ‘good’ recruiting happens through general advertising and with positive word-of-mouth communication,” says Andrea McBride, director and head coach of the rec and all-star cheer programs at Denham Springs, LA-based Leaps and Bounds Sports Center. “‘Bad’ recruiting happens when there is an overstepping of boundaries. Athletes that are clearly committed to another gym should not be approached until they have completed their commitment for the season.”

As for whether it makes financial sense for a gym to essentially pay gymnasts to compete there, opinions vary. New or aggressively growing gyms often seem to recruit most heavily, especially in offering substantial scholarship packages to athletes with advanced skills and experience. And this strategy wouldn’t keep happening if it didn’t work—programs that can attract the best athletes are often the ones taking home the gold. There is also more at stake for today’s all-star athlete, thanks to bigger trophies, more gymnastics/cheer scholarships, TV coverage and “cheerlebrity” status for the lucky few.

However, recruiting athletes whose sole concerns are the next title or trophy can have a downside. “I don’t know if gyms using recruiting as a quick fix on the way to Worlds really have longevity,” said Morton Bergue, owner and founder of Cheergyms.com. “Once you promise to win and don’t, your kid is going to go to the next gym where they think they can win.”

As the frequency and intensity of recruiting between gyms grows, some cheer professionals are calling for stricter regulations. However, there are few explicit rules about recruiting, and many that do exist don’t require teams to abide by them.

“With the structure we have now, there’s not much we can do about it. And as much as I hate recruiting, as much as I disagree with it, you can’t recruit someone who’s happy,” reflects Bergue. “I hate saying that because it hurts. Even today, I had a girl tell me she was switching gyms because she ‘wanted to win Worlds’—those were her words. It was upsetting and it made me sad, but I can’t promise her that. I can promise we’ll have a good program, I can promise we’ll love your kids and try to get them scholarships and into good colleges, but I can’t promise Worlds. Make your kids happy and they won’t leave—that’s the moral of the story.”