The old adage “Go with what you know” is a familiar one for Cheer Savannah owner Stephanie Britt. When hiring new employees, Britt tends to go straight to the source—athletes from within her gym who’ve been there, done that.

The decision has always been a no-brainer for Britt, who finds it extremely advantageous to use coaches who grew up in the culture of the gym. After all, they already know the drills and terminology, so very little training is necessary. In addition, the athletes are familiar with gym policies and can teach others how to best represent themselves and Cheer Savannah to the community. “You’re only a leader if people follow you,” says Britt, “and leadership is key to any gym program’s success.”

Britt isn’t alone—this strategic move speaks to the ushering in of a new generation of all-star athletes just starting their cheer careers and taking the reins. As the industry has matured, so have its core athletes who have cheered all-star since they were young children. This experience gives them a unique vantage point to offer current gym owners, many of whom live and breathe the business but never had the chance to take the all-star mat themselves.

Angela Havard Patton of Texas Cheer is also on board with this approach. She says she exclusively hires only current and former all-star athletes to help run her cheer program, which is designed to be a “low-cost, low time commitment” gym. “I believe in hiring and training our youth to be leaders,” says Patton, “because they are so open minded at a young age and have so much creativity.” 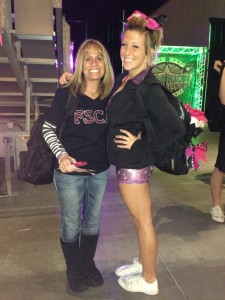 Considering hiring some athletes on as coaches or staff members? Find out how to make it a seamless transition from those in the know:

Give it a test run. Consider holding a tryout of a different type—at Cheer Savannah, all coaches must go through a trial period in which both sides try each other out before permanently joining the staff. During that time, Britt looks for “that glow, that passion, that leadership—you just know when it’s there.”

Currently, Britt has two former athletes and even two moms-turned-coaches on her staff. After being around the team and helping their own daughters train, the mothers learned so much about cheering that Britt decided to use all that impromptu education and put them to work. “They have the gift,” says Britt, who firmly believes that a coach’s most important attribute is the ability to mentor and lead.

Continue to foster a sense of loyalty. One of the great things about hiring an athlete from within is that he or she likely already has a strong loyalty to you and your program. Just ask Steven Hogenson, who spent his senior year of high school cheering at Eagan, MN-based Northern Elite All-Stars and now both coaches and cheers on the gym’s open team. Hogenson says he can understand how important the gym is to the kids since he used to be one of them. “The gym is not just a job, but a home and family,” says Hogensen.

Communicate clear expectations. With a doctorate in special education, Patton uses her background as a behavior specialist to teach athletes not only cheer skills, but also how to become leaders. She firmly believes the key to keeping kids out of trouble is to give them a home base, a place to go and rules to follow. Because the younger kids look up to the older ones as real life role models, Patton expects her athlete/coaches to also assume leadership roles in the community. She has a strict policy against any negative social media activity and asks the athletes to hold each other accountable by reporting to her any suspect behavior.

Patton feels that ultimately, when coached by peers, kids try harder. “When you set the bar high, kids rise to that level,” says Patton. Her mantra for coaches: “You must be reliable, you must make a commitment, and you must show up. You don’t let down your family.”

Help them embrace their new role. One of the biggest challenges many athletes-turned-coaches face is asserting their newfound authority to others that were once teammates or friends. 18-year-old Elaina Bertoli can relate—she currently helps coach four teams at Five Star Cheer Academy in Joliet, Illinois, while still competing in All-Stars and preparing to attend college in the fall.  Gym owner Angie Caldwell first asked Bartoli to help coach the minis and younger teams when she was 15 years old and she’s been wearing two hats ever since then.

“The hardest thing about transitioning from being a peer to coaching is knowing when to step back from being a friend to being a teacher,” says Bartoli. She says that Caldwell has helped her feel more comfortable in the new role by always having her back and encouraging open communication when problems arise.

Bartoli is also continually learning new lessons. She recently suffered a slipped disk and concussion, which showed Bartoli the importance of proper safety precautions and taught her about what is most important as both a competitor and a coach: “I learned you have to fail sometimes in order to really be able to appreciate winning.”