When Alexandra Allred made the first U.S. Olympic women’s bobsled team in 1994, she expected to train hard, eat healthy food and get plenty of sleep. What she didn’t expect was that she’d become an enthusiastic journal keeper.

While living at the Olympic training center in Lake Placid, Allred’s coaches encouraged her to write down descriptions of her workouts, including any injuries and “off days,” as well as dietary intake. “I was recording everything and it became a daily habit,” she says. “I was writing if my workout was good or bad, how I felt about that and why. After a while, I could see patterns emerge.”

Now a writer and teacher at Navarro Community College just south of Dallas, Allred points out that journaling isn’t just beneficial for individuals but can also help the team at large. “Some of the entries could identify a cause and date of an injury. If your back is tight, your ankles are tender, or you can’t stick a landing, write it down. As a competitive athlete, you’ll be able to see patterns and reference dates.

Journal writing also served as a motivating factor for Roisin McGettigan, a 2003 track and field Olympian for Ireland. She credits the practice of keeping a journal with helping her take ownership of her athletic pursuits. “When you record your training, it crosses the line between being casual or serious about the sport,” she says. “I was able to track my progress, learn what worked and what didn’t. I could figure out why I was tired and see if I over- or under-estimated my training.” 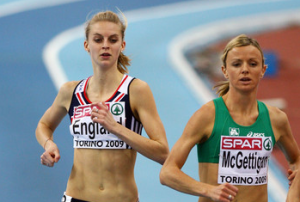 Additionally, keeping a journal helped McGettigan move toward her Olympic dream. “When you’re ready for a competition, you can look back and see all the work you’ve done. It makes you confident and prepared when you see the improvement. It encourages momentum. You can anchor your mind, dispel self-doubt, motivate and excite,” says McGettigan, who now resides in Providence, Rhode Island.

These experiences led McGettigan to develop “Believe I Am” training journal with national track and field champion Lauren Fleshman.  Intended to help track athletic performance, this journal also provides space for personally inspiring quotes, post-competition reflections, freewriting and drawing. It’s not hard to see how journaling might translate to the all-star cheer sphere—after all, an Olympic training journal could just as easily be a Worlds training journal. Along with athletes, coaches and gym owners might also find it useful, keeping track of everything from how stunt groups are performing at practice to monthly revenue numbers.

Journaling can also be a great tool for cheer professionals who want to empower their athletes—simply encouraging athletes to journal might make a world of difference in morale and mindset. Richard Kent, Ph.D., associate professor and director of the Maine Writing Project at the College of Education and Human Development, University of Maine, has used writing techniques with athletes since the early 1980s. He notes that athletes who journal become more engaged, self-aware and mentally sharp, less stressed and better able to cope both on the mat and off.

“It’s wildly interesting that athletes, when given opportunity and guidance, explore their own thinking and gain knowledge of their sport,” says Kent, who is also author of Writing on the Bus.

While a variety of protocols are useful, Kent finds that taking five minutes after an event to “unpack the competition” enables the individual to look more deeply into his or her performance and identify strengths and weaknesses. “More important, it helps the athlete be more objective and avoid blaming [judges]. You can be more balanced, thoughtful and reflective,” he says.

On a team level, journaling inspires productivity. “It’s a precursor to more thoughtful, engaged conversation. Your thinking is more organized and balanced. You can communicate on a higher level,” Kent says.

Allred nails it when she says, “Journaling defines who you are and who you want to be in this world.” And whether it’s world champion, top cheer coach or owner of a lucrative gym, it can be one step closer to getting you there.

Check out our CP blog for journaling tips from an Artist’s Way expert!