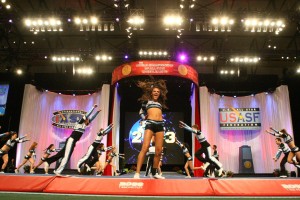 Liz Gigante Ulrich awakes every day with a mission in mind. As the owner of G Force Gym, home to the Vancouver All Stars, she walks the talk she preaches to her athletes and coaches about the importance of a purpose-driven life.

Based in British Columbia’s Port Coquitiam, the gym’s cheer program consists of 20 teams Levels 1 through 5 made up of 400 athletes in uniform, with an additional 150 on half-year prep teams or taking classes. All the teams fall under the guise of Gigante Ulrich and more than 20 credentialed and certified coaches. The program’s IO5 Ice Queens, coached by Gigante Ulrich, took home the silver in April in the international open category at this year’s Worlds competition.

The elite crew’s complicated walk-in paper dolls, Shushanova-inspired basket tosses with half-twists and full-around pyramid—combined with eye-catching sass—helped the Ice Queens drive home the message that Canada is a force to be reckoned with on the international cheer scene. Their style, a reflection of Gigante Ulrich herself, is trending, too. The trademark Ice Queen Stomp has been sighted stateside in routines, and some teams have taken their style cue, sporting tiaras à la the royal crew.

Such achievements aren’t what Gigante Ulrich envisioned as a high school cheerleader, or while cheering at university, taking six classes and working three jobs. Goal-setting helped her earn her bachelor’s in kinesiology and a master’s in education, opening the door for her teaching career starting in 1995. That gig offered the chance to create a cheer program at Port Moody Secondary School.

Not long after starting the school’s cheer squad, Gigante Ulrich coached an all-star team through a camp with students from surrounding high schools. That experience motivated her to open G Force Gym. The 8,340-sq. ft., state-of-the-art training facility opened in 1999, becoming the first cheer gym in Western Canada and the first in Canada to offer two full-sized mats.

Gigante Ulrich still strives for more. She is in the process of relocating G Force Gym to a much larger location with a $3 million price tag. To help make that happen, she joined the Entrepreneur Organization in Canada in 2011 to become more business-savvy by learning from successful business owners from industries outside the cheer world. “I was able to learn a lot more from looking at them than by looking at other all-star gyms,” she shares. “Looking at CEOs and owners of successful businesses, you notice that they all have very similar characteristics and traits about them and the way they deal with issues. That inspires me.”

The organization taught her the importance of investing in her staff and crunching numbers. “I figured out which numbers mean something in my industry to make sure that I am on target,” says Gigante Ulrich. To work toward the expansion, she runs a tighter ship and built a more comprehensive pro shop. She also tweaked G Force’s core values and mission statement, while shifting her own focus: “I am now focusing more on big picture while empowering staff in managerial and choreographer/head coach roles.”

To stay in the mindset, Gigante Ulrich begins her day researching motivational quotes to stay aligned. The gym’s walls and social media outlets are covered with the sayings lest someone forgets to wake up feeling excited to be alive. But at G Force Gym, that rarely happens.

“I get feedback from parents about how much the kids love it, how they breathe it and it is their passion,” Gigante Ulrich says. Families report increased confidence, optimism and ambition in their cheerleaders. “When I hear those things, I feel like I am living what I am meant to do, like that’s my legacy.”

The staff helps members strategize their goals by setting short-term and long-term goals. They also make sure to celebrate the milestones so they feel a sense of accomplishment. “Dream big, don’t give up and go for it,” Gigante Ulrich says, repeating one of her mantras. “We can achieve goals if we set out on a path and stick to the plan.”

‹ Part 2: Free & Low-Cost Systems, Policies & Technology That Every Gym Should Have in Their Toolbox › 5 Surprising Mood-Boosters