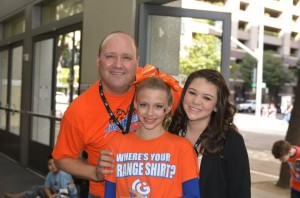 When in doubt, diversify, diversify, diversify. For CheerGyms.com owner Morton Bergue, all-star cheerleading is just one part of a bigger puzzle, as it comprises one-fifth of overall business. To maximize profitability, Bergue and his team regularly host classes and stunt/jump clinics for novices and school squads, and space is rented out during non-peak hours for everything from birthday parties to Tae Kwon Do classes. Much like master classes at a dance studio, Bergue also orchestrates weekend workshops with notables like Victor Rosario and Debbie Love.

The move isn’t just a smart business strategy, but a necessary one—says Bergue, “It’s the only way to make a gym paying California prices work.” (Bergue pays around $1.25/sq. ft.) It’s also a branding tactic for Bergue, who says the phrase “cheer gym” is perceived as more inclusive by their customer base. “You call it an all-star gym, and high schools and youth groups don’t want to come because they’re afraid you’ll steal their kids,” he shares. “My philosophy is that as a ‘cheer gym,’ you open up your money a lot more. Otherwise, you’re completely reliant on all-stars.”

Bergue’s philosophy also translates to competition, which isn’t as much of a focus for CheerGyms.com as team bonding and family atmosphere. “I’m an old dinosaur. I try to run [this business] on integrity and make the kids have a good year, not be all about winning,” he shares. “Worlds is just one percent of our industry—most kids are levels one, two, or three. That’s the kid we want to nourish.”

This practical approach has been key to Cheer Gyms’ success and longevity. The program’s roots were first laid in 1995, when Bergue left his post as NCA’s West Coast Director to team up with Danny Kahn (who created the first all-star team in the country in the mid-80s) and then-owner Patricia Reith. The trio launched what was then known as Pyramids, Inc. with an enrollment of 25 cheerleaders. 27 years later, Cheergyms.com is one of the longest-standing programs in the country, boasting three gyms, 200 all-star cheerleaders, 800 class cheerleaders, and regular engagements with 15 high schools. “We got into this business at the beginning,” says Bergue.

Along with the growth of his own program, Bergue has immersed himself in the international sector of all-star cheerleading, where he sees a lot of growth potential (largely thanks to greater exposure in the media and on sites like YouTube). For the last decade, Bergue has been judging national competitions in London and has also appeared at camps, clinics, and conferences in Japan, Mexico, Canada, and other countries. “Opportunities in other countries range from judging to clinics to speaking to choreography,” Bergue says. “Many [cheer professionals] are taking advantage of this boom of cheer across the world and making good money on it.”

And he’s paving the way.