Off-season can be a slow time, but Kansas City Athletic Cheer has found a way to keep up the competitive momentum: stunt charades. “The athletes come up with stunts and act out a theme, like a movie or a favorite summer activity,” explains KCAC owner Johanna Lucas. (Picture a Frozen theme where one stunt group has an “Ella”-esque flyer freeze the other group with choreographed arm motions, or a Brave Little Toaster-themed basket toss.) Adds Lucas, “This gives our girls the opportunity to show off skills that they’ve worked on throughout the year and to come together as a team to try out new things.”

This is just one of many ways in which Lucas and her staff keep their teams engaged, and it shows—KCAC’s program has doubled in size over the past three years. Also, in 2014, KCAC advanced to Worlds semi-finals for the first time, and the gym was one of three finalists for USASF’s Program of the Year. 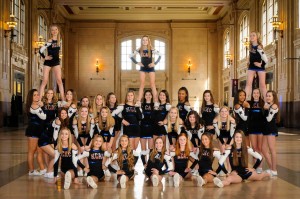 It’s a far cry from the gym’s humble beginnings, says Lucas. “We started with three athletes in 2002 and grew slowly for the first few years; we had no intentions of being a competitive gym back then,” shares Lucas, who launched the program as a platform for her daughter and her friends to try out all-star cheerleading and tumbling without having to commit to the travel. “I was just renting space from a local gymnastics gym.”

Since the original roster of KCAC athletes was composed of competitive soccer players, the girls got their start by performing at local high school soccer games—but after Lucas took her team to a local exhibition, the girls fell in love with competing. However, Lucas stuck to her original vision of keeping it local: “We have only traveled great distances with our [Level] 5’s,” says Lucas. (That’s starting to change though: this coming season, each KCAC senior team is slated to travel to at least one competition.)

Over 13 years, KCAC has grown to consist of 160 full year all-stars, 60 prep team athletes and 27 half-season exhibition athletes, along with 120 recreational athletes. “Our exhibition teams have helped our prep teams grow, and many of our prep kids are feeding into our competitive program,” explains Lucas.

Lucas also credits part of the expansion to the thriving Midwest all-star arena. “With the growing economy, we’re seeing more prep teams [in the region], and everybody is starting to get more competitive,” she explains. “We’re all trying to keep kids in the right brackets and that’s going to make for some exciting competitions.” Lucas has also noticed that gyms have started to focus on fostering relationships with other area gyms, as solid family relationships are key to attracting new parents and athletes. 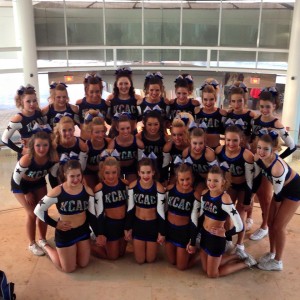 Though competition has become a central focus at the gym, Lucas is quick to distinguish that it’s not about winning. “If you get rid of deductions at a competition, you get a party. If you win, you don’t get a party, you get to celebrate your win,” states Lucas. “At our gym, we celebrate the fact that the athletes did their job.”

In recent years, KCAC has also experienced its share of other types of victories. The program was nominated for the Leadership Through Sportsmanship Award after teaming up with COA to sell T-shirts and bracelets to raise money for a former cheerleader who had passed away from brain cancer. “That’s probably the most prestigious award to give out because it speaks directly to the action of the coaches, athletes and parents,” explains Lucas. “Everyone at our gym understands that we don’t tolerate anyone in our program being unsportsmanlike, and I think that is one of our secrets to success.”

Another secret to success is the staff she has carefully cultivated; Lucas credits them with helping KCAC land the Program of the Year nod, and says that one of her biggest priorities is providing her coaches with continuing education. “Everyone goes every year to USASF training. Everybody gets credentials—we’re all AFTA certified, first aid- and CPR-certified,” says Lucas. “I just don’t think you can get enough education or be safe enough.”

With the support of her staff, Lucas has been able to diversify and host an array of programs, including tumbling classes and high school preparation classes held in January before tryouts. “We do entrances and jumps and teach them different materials. Then, during tryout week, the kids get to come in an hour a night after their clinics and we’ll work with them,” she explains.

Moving forward, Lucas says the gym’s focus is to continue to build athletes from the ground up. “Our goal is to get them as Tinys and keep them as Senior 5’s. Obviously we want to get better and better, and I believe our 5 teams will be great, but we want our Level 1 teams to be as strong as our Level 5 teams,” she explains. “And from there, we hope to naturally become more of a competitive powerhouse.”