There was no time to batten down the hatches. It was business as usual July 8, 2012, at Fredericksburg, VA-based Cheer Fusion. While coach Mandi Spina and her senior Level Four co-ed Dream Team members practiced double downs, the sky turned ominous. The rain pelting the building had shifted sideways, sending a warning through the facility’s garage door.

Within minutes, a loud thunderous noise shook the building and walls around them collapsed as Spina pushed the athletes through the door and crammed them into a corner, using her body to shield as many of the 10- to 18-year-olds as possible. Debris, cinder blocks and glass swirled around them as the gym disintegrated.

In less than 10 minutes, there was almost nothing to show for the six-year-old gym. Two of the cheer parents were found buried under debris outside of the safe room; they both survived but suffered serious injuries. The trauma spared no one.

But even Mother Nature cannot shake Cheer Fusion’s spirit and determination. Leaning on their mantra “Faith, Focus, Believe,” Cheer Fusion’s staff and athletes refused to quit. Within a week, Spina and gym owner Connie Allen decided the kids needed the gym rebuilt as part of the healing process to find their strength to move on.

“It wasn’t really our decision,” Allen says. “All I had to do was look at those kids. They were the reason. The kids wanted the rebuild. They needed a place to go.” Many of them were spending seven days a week at the gym at that point, working hard to progress, and Allen and Spina didn’t want to let the athletes down. For some kids, the gym was a second home.

Other facilities in the community opened their doors to the Cheer Fusion teams during the one-and-a-half-year rebuild, including North Stafford High School, Paragon Gymnastics and the Fredericksburg Ballroom. The all-star cheer world rallied, too, from The JAM Brands’ Brandi Sims setting up a fundraising account to other cheer programs holding T-shirt fundraisers and sending care packages. Some gyms donated equipment, and Spring Floor Guys in Delaware pitched in a new hardwood floor. 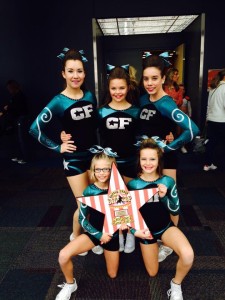 The efforts paid off—Cheer Fusion’s new home is nearly twice its original size. The extra space opened a world of possibilities not to just survive but to prosper, particularly by expanding the gym’s tumbling program run by Stephen Young. What started with one or two Saturday classes turned into a three-coaches-strong tumbling program offering up to five classes daily. “It’s been a big surge for the gym,” Spina says.

During the rebuild, a new dance room was also added with full-length mirrors and a hardwood floor. The addition has allowed dance director Diana Hill to add breakdancing and tutting classes to the mix, along with master classes with special guests like dance crew Jungle Boogie and Bonita Lovett from Beat Freaks.

Now the small gym, which has grown from 25 to 130 athletes since its second season when Spina came on board, plans to add a Worlds team by next season. Allen and Spina don’t let Cheer Fusion’s size steer its competition schedule. “We set ourselves apart by going out of our comfort zone so we can see what people are doing in other areas,” Spina says.

The experience and exposure Cheer Fusion gains from expanding its travel schedule pays off on the cheer floor. Case in point: During Cheer Fusion’s most recent and best season yet, they earned 51 first place wins, 12 grand champion titles, paid and at-large bids to Summit, an at-large bid to the Dance Worlds and five US Finals paid bids. Cheer Fusion was also one of three national finalists for USASF Small Program of the Year, and Spina was named the Cheer & Dance Extreme Coach of the Year for the 2013-14 season. Cheer Fusion team parents nominated Spina for her courageous actions during and after the tornado flattened their facility, as well as her top-notch coaching skills. 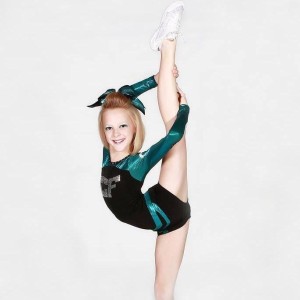 More recently, in November the teams stormed Battle Under the Big Top in Cincinnati with three teams, winning each of their divisions with deduction-free routines. The Dream Team was named Level 4 grand champs and they earned a Summit bid.

“It’s all about the dedication you put into your team,” Spina says of her coaching style, which pushes the kids to be the best athletes they can be. “I am about effort. You don’t have to be the most talented kid on the team to make an impact. They are like puzzle pieces. Our whole team is a jigsaw of different talents and different personalities. You take those together and find the right way to coach that measures their strengths and weaknesses and then highlight them best you can—that’s my philosophy.”

Spina and staff are good at putting things back together again. And while they are putting much of the past behind them, some of it remains under them. Salvaging a few of the strips from the gym’s old floor ruined in the tornado, they were able to have a six-panel hardwood floor built from the remnants at the front of the facility.

“It was a heartwarming moment to see it all come together finally,” Spina says. “The kids who were in the building when it collapsed wanted to be the first kids to tumble on it, the first ones to jump on it or to do a standing tuck. It was really cool to see everyone come together for that.”