It All Counts: Scoresheet Breakdown 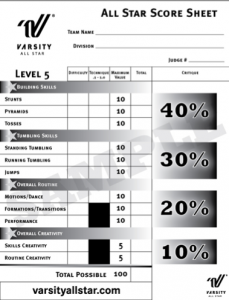 In the cheer world, it comes down to knowing the score. With a variety of complex scoring systems in competitions, it can be a challenge making sense of it all. Here are some things you need to know about how some of the major players in the business add it all up.

Many companies and event producers use Varsity’s All Star Scoring system, which was introduced three seasons ago. Its scoresheet is primarily composed of four main categories: Building Skills (which accounts for 40 percent); Tumbling Skills (30 percent); Overall Routine (20 percent); and Overall Creativity (10 percent). Depending on the level, those categories are then broken down into further subsets such as pyramids, jumps, motions/dance and performance.

This year, the scoresheet was further refined with a new scoring rubric, according to Justin Carrier of Varsity Brands. “We took every one-point range for difficulty and broke it down even further into low, medium and high ranges, setting black-and-white expectations for those teams trying to ‘max out’ their difficulty score,” says Carrier. For instance, 8.0-8.2 would be considered “low,” 8.3-8.6 “medium” and 8.7-8.9 “high.” Adds Carrier, “It makes it less of a guessing game as to where you’ll fall.”

Another significant update is the list of new elite building skills required to reach the highest level-appropriate range for stunts. “We re-categorized elite building skills because the teams have gotten so talented,” Carrier says. “The teams have pushed the envelope with difficulty, so it forced us to reevaluate.” In addition, Levels 3, 4 and 5 of the senior co-ed stunting teams (with some select exclusions) must now perform single-based, unassisted stunts.

Along with all Varsity brands, companies like Cheer America, Universal Spirit, CheerSport and Americheer have adopted the Varsity scoring system. According to Americheer’s Jeannine Kranchick, the company relied on feedback from coaches, judges and industry leaders to determine which scoring system to use. “We felt this was a great fit for our customers,” says Kranchick, who acts as Americheer’s Marketing and Public Relations Coordinator. “It is easy for judges to calculate and easy for coaches to understand the scores.”

At Jam Brands, category judging is utilized. This scoring system consists of three panel judges in the areas of 1) tumbling 2) stunts and pyramids and 3) jumps, tosses and dance. Along with objective points earned for difficulty, judges also give subjective scores on technique, execution and overall impression. For instance, a score of 7-8 is “fair,” 8-9 “good” and 9-10 “excellent.”

“Difficulty scores are based on required elements that are allowed in different levels per the USASF,” says Jeremi Sanders, the company’s scoring director. “We use a rubric for all of our objective scores. We give a separate technique score, because we encourage teams to execute elements in their routine that promote safe skill progression.”

Each year, Jam Brands updates its scoring system to meet the needs of coaches and teams nationwide, according Sanders. “All of our judges are vetted and trained,” says Sanders. “They are required to take and pass a test based on our scoring system. We continue training throughout the year with weekly conference calls and event-specific clarifications.”

Sanders says Jam Brands was the first in the industry to introduce a unified scoring system back in 2009. Other strides include the creation of a department solely dedicated to judging and scoring and the introduction of co-ed specific scoring and quantity scores for whole team participation. Last year, the company also designated its own scoring representatives at events who can answer questions asked by coaches and oversee the judging panel.

Regardless of the scoring system in use, there may be a bigger picture to keep in mind. “A successful system is usually a consistent one, so coaches and judges don’t have to relearn it every year,” Carrier says. “A lot of emphasis is put on the scoring system, but it’s really the judges and the judges’ training that ultimately affects the outcome.”

[sidebar] Universal Scoresheet—Will It Ever Happen?

Though the initiative stalled, talk resurfaced at the NACCC meeting in Doral last May, and in October, the NACCC released a position statement from its Universal All-Star Judging System Summit. “In order to enhance the integrity of the industry, the NACCC along with event producers have implemented a plan to develop a Universal Scoring System for All Star Cheerleading competitions,” the statement reads. “To ensure quality, fairness and consistency, a committee made up of judges, coaches and event producers will utilize their expertise and experience to create a structured scoring system to benefit the athletes, coaches, spectators and event producers. The development process for the system is scheduled to take up to 24 months which will include careful analysis of available systems, assessment and editing.”

As development and discussion continue over this 24-month timeline, the debate continues among some circles about whether it will truly be beneficial. Karlette Fettig of Indiana Elite sees both sides. “From the gym’s perspective, it would be easier not to have to worry about the differences between competitions; once you put a routine together, you know you won’t have any nuances from competition to competition,” she says. “However, I do understand from an event producer’s perspective that it takes away a piece of their individuality. I’m not sure it’s fair to them.”

Spirit Celebration’s Billy Smith is one event producer who’s all for it. “I am so excited to see the coaches getting organized and taking control of their industry,” says Smith. “This idea has been presented for years and shot down by the USASF without the support of the larger event producers. Now that the coaches are leading the crusade, I think it can really happen.”

‹ Candid Coach: Heather Zidek › Universal Scoresheet: Will It Ever Happen?