With eight cheer gyms within a 30-minute drive of Beaverton, plus five more for a little extra gas money, it’s no small claim when Oregon Dream Teams calls itself the fastest-growing gym of its kind in the state. The region’s saturated cheer gym market also means that bringing new athletes through the doors is no small feat.

So it’s somewhat surprising that Tori and Dan Cotton decided to take a minimal marketing approach when they purchased Oregon Dream Teams during the 2011-2012, letting their product speak for itself. But the gamble paid off: the result was a second location within two years—and twice as many athletes.

Sure, they generated some leads through their website. Plus, one of their coaches, a social media strategist at an outside marketing firm by day, tackled Facebook, Twitter and Instagram to shout out team and athlete successes. And members were encouraged to bring buddies along to check out Oregon Dream Teams.

But there was no aggressive membership drive, no slashing of prices, no gimmicks. They just offered well-trained coaches who served as mentors and worked alongside athletes’ parents to reinforce positive behaviors in line with family values. They communicated with families about everything from why events were chosen to where all the fees went so that everybody felt invested in the Oregon Dream Teams vision.

“We give our clients the truth,” Dan says, “not a sales pitch. That makes everyone part of the family.” And who knew? People liked it so much they started telling others about it, and the marketing soon took care of itself.

As membership increased, it didn’t take long for the Cottons’ clients who were driving four hours round-trip to start mentioning how great it would be to, say, not drive four hours round-trip. They made it clear that they would really, really like it if there was a second, more southern location.

They were making the drive because the gym’s championship teams consistently earn bids to Worlds and boast multiple titles. The gym has the longest-running and highest-ranking level 5 team in the state, which Dan says brings a lot of notoriety to the program. (To date, their “Dream” Senior Medium Coed 5 team is the only Oregon-based team to place in the top 11 at Worlds.) 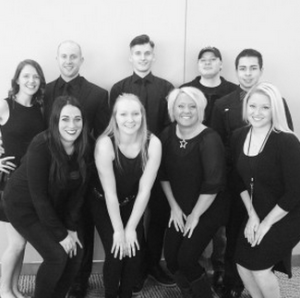 Still, the Cottons’ eyes were not on growth initially, especially since owning even one location wasn’t the original plan. Tori, who started cheering in high school, began coaching as a means of making extra money while she earned her masters in early childhood development and elementary education. But by the time Tori graduated, the school districts were firing instead of hiring due to budget cuts.

Dan, who is a police officer, wasn’t looking to go full-time cheer either. But fate stepped in. When Oregon Dream Teams, where they coached, went up for sale, Tori and Dan took the leap. Dan swapped out his usual late-night patrol shifts for a school resource officer position instead to better balance his time for the business, and the two made it work.

So when Tori and Dan were approached about opening a second location a couple of hours away, they were understandably hesitant. Satellite programs they ran at other gyms had not performed well, and there had been other gyms in the Eugene area that did not succeed. But the phone kept ringing, and by December 2013, there was no avoiding the constant encouragement for expansion.

They gauged interest by hosting a couple of clinics in Eugene, and by the second workshop, it was clear they needed to start looking for a permanent location. By April 2014, they were in business—again. “We hoped that new athletes would join but were not truly prepared for the number we saw,” Tori says. Within a year they had 42 athletes, three teams and continually growing interest at the Eugene location. Like their athletes, they rose to the challenge.

Running a second location from Beaverton came with a few growing pains to start. Because the married owners can’t be in two places at once, and they naturally don’t want to be apart, they have to rely on others to pull it all together. That was when the family atmosphere they created came in handy—they were able to reach out to trusted, committed family members of athletes and coaches to help manage the facility in their physical absence.

Challenges of continuity and routine perfection with new staff occurred, but they mitigated that through periodic visits and a recording system that enables them to watch and review practices in real time. “We are always working to make the program and product the best it can be and that will be a continuous evolution,” Tori says. “But when you double in size, that evolution becomes more of a sprint than a walk.”

The adjustments and extra hands help Tori and Dan keep up the pace, and they feel the flattery and gratitude along the way. “We could not do it without the support of our families, athletes and staff,” Dan says. “In the end it always comes back to being about the kids. We keep that as the focus, and it all seems to work itself out.”

‹ The Business Book That Changed Everything › Making the Grade: The All-Star to College Transition