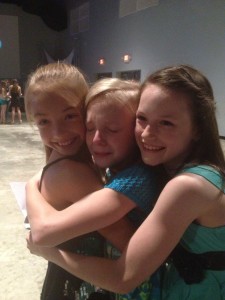 At Kernersville, NC-based Cheer Extreme Allstars, team placements are no longer simply announced online, but have now become a festive affair with much more fanfare. This spring, owner Courtney Smith-Pope introduced the “Teal Reveal,” a gala event held at a local church. Smith-Pope spent the morning with her team moms stuffing personalized invites for each athlete, and when she yelled “Go!” later that night, the athletes eagerly ran to each decorated table to see which team held their fate. In retrospect, Smith-Pope said she loved seeing the athletes react to their placements—hearing happy screams, seeing them hug their moms, being able to comfort a select few who were disappointed—but the event was also helpful on a practical level.

“We get to say thank you to all the parents personally. They come in, and they’re all dressed up, and we show a video with the highlights of tryouts that gets everybody all excited for the season,” shares Smith-Pope.

Of course, not everyone is always excited by the news at the start of a new season—many gym owners must deal with parental pressure to place their child on a higher-level team. To keep team reveals from being stressful and/or tense, it’s important to set the tone for a positive experience by establishing clear expectations, outlining long-term goals and, of course, communicating with athletes and parents.

1. Have standards—and stick to them. While parents may want to see their child succeed right away, the proper placement is one that will be both safe and challenging for the athlete. The best way to avoid unpleasant surprises on placement day is to be specific about what you’re looking for from athletes at each level and make sure everyone on staff shares your vision. Jessica Bugg Smith, owner of Nicholasville, KY-based Kentucky Reign, advises, “Establish policies and procedures for how you want to run your program, and be consistent across the board. If you say that you need a certain skill set for a certain team, you have to stick to your guns.”

2. Follow your own rules. Gym owners and coaches often face pressure to give certain athletes special treatment, but when you do a favor for one person, word gets around. Other parents will expect you to bend the rules for their children, too. Cheer Extreme Allstars is in its 20th year, and Smith-Pope has learned a few things along the way. “The kid you put on the team because you’re close to them…it never works out in the long run. It gives them a more inflated sense of value than they really actually have. They take advantage of the situation, and it’s worse when other parents find out that something like that happened and you moved a kid or did something after the fact. You have to be on the up and up.”

Letting favors affect team placement also does a disservice to the whole team. Bugg Smith offers this example: “You take a child who’s working on a back handspring, right at a Level 2. You put her on a Level 4 team, and what ends up happening is one of two things: either the kid with the Level 2 skills doesn’t continue to develop her own skills, because in practice, you don’t have time for her—or on the flipside, you focus so much on trying to get that kid up to par that your Level 4’s aren’t getting what they need to get to Level 5.”

3. Build relationships. Create an environment where parents know you want what’s best for their child, so they will trust you and respect your decisions. Bugg Smith communicates with parents as often as possible about their child’s progress, and she makes it crystal clear that coaches and parents are working toward the same goal. “All we all want is success for the athlete,” shares Bugg Smith. “Our coaches’ number one priority is to give their kid the best chance of success. That doesn’t necessarily mean winning every championship, but that the child is progressing and growing.”

4. Create a shared vision.  Proper placement benefits the individual athlete, their current team and every team they join in the future. Bugg Smith advises owners of smaller gyms to think long-term: “It’s very important that we’re focusing on the process of developing the athlete versus just where they are this year.”

If an athlete or parent is disappointed in a placement decision, they may threaten to leave and go to another gym, but according to Smith-Pope, that’s a mistake. “The biggest skill you can have in our sport is competition experience. Sometimes they think, ‘I’ll work on those skills and then come back to Cheer Extreme,’ but in reality, if you want to make the team, you want to be on the floor with us, years prior to that.”

5. Consider how you share the news. A successful team reveal relies on finding the right fit for your gym. At Kentucky Reign, team placement is a relatively casual experience. Bugg Smith explains, “We just need you to come in, see what you can do. Generally people know where they’re going. It’s not a big surprise.”

At Cheer Extreme Allstars’ Teal Reveal, the event acted not only as a fun way to kick off a new season, but also a valuable opportunity for parents to ask questions. In the past, Smith-Pope would field texts and phone calls from unhappy parents at all hours of the night, but she enacted a new policy at the Teal Reveal: “Any question they have has to be asked in person.” She found that parents were less confrontational this way because they wanted to avoid making a scene. Coordinating an event like the Teal Reveal is certainly more work than posting a list, but according to Smith-Pope, “We had the best year ever last year, and this really set the tone [for the new season] right from the start.”